Do you want some whine with your cheese? 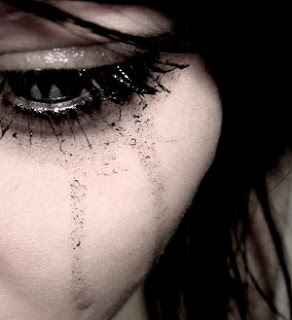 So as I mentioned in my post on Friday I've been watching Sister Wives on TLC.   It's like passing a bad accident on the side of the road.  You just can't help but slow down and look.

Watching it last night I was mostly noticing all the crying the three "wives" were doing over Robin (Kody's new fiancee) joining the family.  Robin was doing her own share of crying too, over "hurting the wives".  ::sigh::  I resisted the urge several times to scream at the TV.

These women have become delusional.  They think this whole arrangement actually has redeeming spiritual qualities. What a crock.  I almost fell off my bed several times while watching especially when one of the wives said that Kody had "prayed about it and come home with a testimony about Robin."  Oh PUH-lease!!!

They should have owned stock in kleenex they cried so much this episode.  But here's the thing -- they have chosen this lifestyle.  They have quite literally made their bed.  And now they are laying in it.  And crying.

From the outside looking in we can clearly see the wrong thinking involved here on their parts, but they actually think all this makes sense.   It's amazing how the enemy can spin things to make them sound acceptable.

As deceived as we think these women on Sister Wives are, I have to say that I know some people who are not polygamists who are living in the same emotional mindset.

People who chose their own circumstances, and then cry over them.

People who want others to feel sorry for them even though they haven't changed.

People who resort to attention getting behavior, rather than owning their actions that brought them to the place they are in.

There is a reason the Lord told Moses to tell the people to stop crying and move forward.  That is a word for some people today...stop CRYING about your choices and DO something about them.   If the Word talks about it, YOU KNOW WHAT TO DO.

Are you crying over something that is only remedied by a repentant heart, accompanied by a change in your actions?  The answer to a bad choice is repentance and then bearing fruit in keeping with repentance.

Sister Wives is a fascinating case study of sinful behavior, choices and consequences.

**Note, in this post I am talking specifically about sinful choices and consequences, not clinical depression.  Big difference.

Anonymous said…
Last evening I spoke to Pastor Cochrane, a retired AG pastor, who is battling cancer. I commented how seriously good he looks. He told me, "I refuse to look defeated. You know there are some who I believe do not want to be healed because they like the attention they receive in their sickness." He is so true. If we are breathing, it is never too late to change! Lately, I've had difficulty praying healing for those whose sin is causing their illness. I don't think God is going to waste a miracle on someone who is going to continue destroying their lives. IMHO.
6:29 AM

Candy said…
I too watch this show and go from snuggled in my sheets to kicking everything off and sitting on the edge. It gets old that people distort the word of God to do what ever pleases them at the moment. PD you know me and I am an advocate for the Holy Spirit and the gifts of the spirit. Yet I am sadden to see how people manipulate it.Saying the Spirit spoke to them when what they are saying or doing goes in direct opposition to God's word. People many times say that so that you have no way of challenging what they say. Thing is if it does not line up/if it is opposite of god's direction, it's bull poop you just want to do what you want to do. Let's start using some common sense. who is really speaking to you is the enemy and your lending ear cause ya like what he sais and it pleases your flesh. Anything you have to hide to do can it really be from god?? I agree let's stop the whining. (Unless you are having medical depression please then seek help) outside of this "child please" PS this guy is a shmuck you can see it a mile away.
10:15 AM

Anonymous said…
Amen, Candy!
True story. Yesterday, I was deep in worship during the moring service. "Mrs. I Heard From The Lord" walked to my seat, put her arm around me and told me, "The Lord spoke to me and said that you need to give up your past, and you know what I mean." I told her I had no idea what she was talking about. She then said, "Let's pray that the Lord will reveal it to you." Not wanting to make a fuss, I went along. This is the 3rd time this has happened from this person in the past month. I believe this is of the devil trying to stop my praise. I spoke to my pastor's wife and she suggested I talk to her right away. (This woman drives me crazy. I know I probably shouldn't say that but she is constantly having "a word", about many people, but she is never correct.) Suggestions on what to say???
10:34 AM

Anonymous said…
I feel bad for the two who were raised to believe that this is normal - I can't imagine teaching my daughter that it's okay and even God-ordained to accept a husband who feels the need to sleep with multiple women [because that's really what it comes down to...if I may be so blunt, Kody Brown's only "testimony" lives inside his pants!].

I am finding it hard to believe that this "choice" is a happy, wonderful alternative lifestyle when they show one of the wives crying just about every frame - including the one who isn't even a wife yet!
8:32 PM

Deanna Doss Shrodes said…
I agree with you totally Leanne...if it was all that satisfying there would not be all this crying.

Ruth, my advice would be to do exactly what your PW said and the first thing I would tell her is, "please do not interrupt me as I am worshipping..." Also watch where/how you sit. For instance, are you sitting on the aisle when she approaches you? Sit on the inside and put your husband on the aisle so she would have to ask him to move in order to talk to you.She may not be willing to do that -- it may be enough to deter her. Sit between 2 people and don't make it easy for her to get to you. Ultimately she DOES need to be talked to because she's going to keep going to others in the congregation and this is just inappropriate.
9:09 PM

Anonymous said…
Deanna,
I never even considered where I sit. My husband is on the praise and worship team and I do sit on the aisle. But I think the kiddos just got promoted there! haha. Thank you, and yes, I am going to speak with her. I just really hate to confront. but who does...really. Thanks a bunch!!
9:19 PM

Deanna Doss Shrodes said…
Ruth, is she a respected member of the congregation? In other words, does ANYONE take her "words" seriously? You may only have to really be concerned about new believers who would not know better that this woman is a flake. Seasoned Christians will know she is not all there. But still the behavior is irritating because here you are focusing on what you SHOULD BE focused on, and she's interrupting. I would almost bet my bottom dollar too that she does NOTHING else in the church and this is what she considers her "ministry." Usually these types don't lift a finger to actually HELP anybody or the ministries of the church. They just like to hear themselves talk. [sigh] Can you tell I've pastored a few "Mrs. I've Heard from the Lord's?" Ha! Ha!
10:04 PM

DaNella Auten said…
Ruth, think of it is a clarification, not confrontation. (John Maxwell tip, helps me cause I hate confrontation toooo!)

Sister wives... Plueeeaaassse. I don't think so. I am not a jealous person at all, I know where my hubby sleeps and he is there EVERY NIGHT. That, well he, is the one thing I refuse to share, he is my own treasure. Also, the fact of the matter is how sad that I am Que's treasure and he treats me like one, how sad it is that none of these women are treasured for themselves alone. I am my husband's one outlet for intimacy. These women can't even say they are their husband's only one.
How sad.
8:27 AM