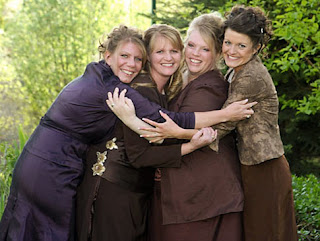 I knew it was going to be an unforgettable night on Sister Wives when I heard the opening statement tonight from Kody:  "I don't wanna be kissin' my girlfriend while my wife's in labor!"


I was going to do a commentary with my thoughts on last night's episode but once I wrote down the following quotes for my blog I realized, there is no need to expound.  The quotes speak for themselves, except you do have to imagine the fact that they are crying the majority of the time while saying all this.   Apparently I'm not alone in my observation that for all the talk they do about this "happy" lifestyle choice there is more crying on this reality show than any other I've seen.  After this post, one of my readers, Pastor Leanne Weber, made the following comment:

"I am finding it hard to believe that this "choice" is a happy, wonderful alternative lifestyle when they show one of the wives crying just about every frame - including the one who isn't even a wife yet!"

I so agree.  Why go through all this grief if you don't have to?  Not to mention, it's abominable.  On with some standout quotes from last night's episode:

Robyn:  "Going from 3 kids to 15 is kind of overwhelming at times..."  [immediately bursts into tears when saying this...]

Robyn:  [while their little girls play with Barbie's]  "They've been fighting over the Mommy dolls, cuz we have four Mommy dolls."

Robyn:  "Remember you girls need to take turns playing with the Daddy doll!"


Meri:  "When you have 20 people it's pretty much chaos...especially when most of them are kids."

Robyn:  "I have to say Brown chaos is really special."


Meri: [to Kody]  I just want you to acknowledge that I have these jealousy issues...and if I were to be giving attention to another guy how would it make you feel?"

Kody:  "Obviously it's not something I'm comfortable with imagining.  The vulgarity of the idea of you with two husbands or another lover sickens me.  It seems wrong to God and nature and I understand it seems somewhat hypocritical but I don't know how to get around it.  Me answering this question....there's no way I can win.  I feel like I'm admitting that what I'm doing [in courting Robyn]  is completely and utterly unfair.


Kody:  [speaking of his and Meri's daughter, Mariah] "There's a chance that just because she's a polyg kid she's not going to get a recommendation..."  [from the governor to get into the Naval Academy in Annapolis]


Meri: [referring to Kody] "I don't think that he understands me a lot and what I'm going through.  And I'm not saying I understand everything he's going through, but...I really want him to understand."


Kody:  I want to say that I'm sorry in this process that heartbreak happens".  [to Meri as she is sobbing]


Kody:  I haven't been told in a strong enough fashion yet that no  means no yet."


Meri:  Even though Kody and I are in a polygamous relationship, we can live happily ever after too."

Anonymous said…
wow...
I actually tried to watch that show the other night but it made me so angry I had to change the channel. Don't these women know they deserve better?
12:12 AM

Dr. Deanna DossShrodes said…
I don't think they do realize it...watching every episode so far and observing I have come to believe they do not know their worth otherwise this lifestyle would not appeal to them whatsoever.
12:24 AM

Melissa said…
Goodness, I can't even watch the show but just reading the quotes makes me want to slap these women into reality of the whole mess and really give this guy a beating. Not sure which one stands out more to me but to even suggest that having another child will be a cure all to this issue Meri has is absurd! Is Meri the first wife? I have a feeling she would much rather be the only wife. It just seems to me that these women are NOT happy at all and seem desperate to keep his attention. The feelings of "I'm not good enough for him, or I can't full fill his (sexual) needs" must run very high in these women! Sad! Just sad!
7:55 AM

glor said…
It's reassuring to know someone ELSE notices all the crying on this show, and how actions speak louder than words.

Although they say whatever they think of to show how 'happy' they are, the tears just show the amount of stress that they are under.

And sometimes I just feel like slapping Kody in the face.
9:50 AM

Unknown said…
Vote with your remote control and CHANGE THE CHANNEL! There is no reason you need to have this ickiness in your lives.
11:09 AM

KathyM said…
This comment has been removed by the author.
5:54 PM

KathyM said…
Take care what type of seeds you allow to be planted in your spirit. What you place before your eyes and your ears WILL produce.

Lisa N Alexander said…
I tried but couldn't do it. This show is unbelievable.
10:30 PM

Candy said…
The whole thing is a hot mess truth be told. Glad real women of God are comment PD. Sometimes we are so out of touch ( not that we need to open ourselves up to everything) Thing is this is REALLY GOING ON RIGHT NOW IN REAL LIFE!Lets be informed and ready and able to tell people what the deal is and that this show does not represent who REAL Christ followers are like. Because we close our eyes or the channel it will not stop happening, but if we post and tell what the truth while we pray it could help. PD thanks for keeping your finger on the pulse of things and speaking up. YOU ROCK!
6:30 PM

Melissa said…
Whole heartily agree with you Candy!
12:32 AM