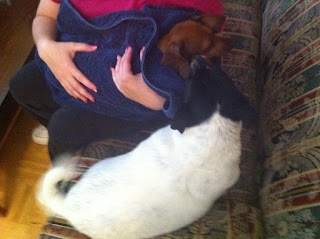 What an eventful day  yesterday.  I bike in the mornings on Wednesday because we have church that evening and if I don't go in the morning, I wouldn't be able to go.  When I was coming home in from my ride yesterday morning I looked down and noticed a little dog had followed me right on  into the living room!  I hadn't even heard her because I had my earphones on.  She was a little black and white Jack Russell.  Before I could even bend down to pet her, lo and behold there was ANOTHER dog -- this time a brown miniature dachshund!  Where in the world did they come from?  We had no idea, but we went out and started talking to neighbors and discovered they had apparently been wandering around the neighborhood together for 3 days!  They were panting...and so thirsty.  The dachshund also had a huge (tennis ball size) lump on her neck.  I noticed they were scratching a bit so after feeding and giving them water, I told Dustin to help me put them in the tub.  We bathed them real good with flea and tick shampoo, and then called our vet who told us to bring them over to see if they were micro-chipped. 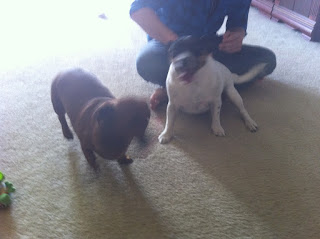 The Dachshund was micro-chipped however the owners never registered their information so there is probably no way of locating them.  The Jack Russell was never registered or chipped.   Chances are they were abandoned.  Both are trained and seem to have very good dispositions.  Gayle Lechner from church immediately said she would take the dachshund and get her whatever medical care needed.  They were immediately smitten with her and have named her "Molly Brown."  (The unsinkable Molly Brown!)  Dustin would like to have the Jack Russell if he can handle her and has named her Kayte ("Kay-Tee").  It was an unexpected birthday surprise, for sure!    He will have to see how he does with taking care of her for a week or so, and he'll also have to take her back to the vet to have all her shots re-done as well as any other care she'll need.    So far Maddie's doing ok with Kayte but Max isn't so sure.   I'm praying that they will be able to become friends.   Also that Dustin will adjust well with her.  He'll have to totally step up to the plate and take care of her as Larry and I have our hands full with M & M.  Of course this will be a moot point if the owners come forward, but my gut feeling tells me these dogs were abandoned and that won't happen.  If they weren't abandoned and somebody's searching for them I sure hope they find us because how painful it would be for somebody to be missing their babies. 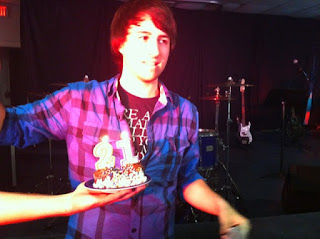 In other surprises, we had a party after church last night for Dustin's birthday.  He took Kayte with him to church last night because we didn't have a cage for her at home and Michele was bringing one to church.  It was just as well - everyone got to see Kayte.  Friends came from outside the church including his friend Peter from DSOM (District School of Ministry) and Pastor Sam & Tamara and the kids.  Some of my wonderful Celebration friends helped in making a bazillion cupcakes.  Dustin drinks "Simply Orange" everyday and his friends blessed him in bringing a whole bunch as well as Chic-fil-A milkshakes.  After everyone got something to eat people took turns coming to the microphone to say things about Dustin and memories they have with him and how much he means to them.  It was very touching and a great time was had by all.  When he got home with Kayte he discovered that "Mrs. B" the manager from the theatre where he works had left him a balloon bouquet on the front door.   She wanted to come to the party at the church (I invited her) but had to work last night.  She thinks the world of Dustin (who is a supervisor at the theatre) and he feels the same.  He's one special young man and anybody who comes into contact with him knows that after just a few moments of talking with him.  Yup, I'm a proud Momma.