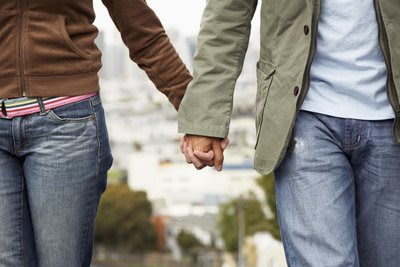 Sunday night I had a horrible dream that Dustin married the wrong person.

What's the definition of "the wrong person?"  Well, in the dream he married someone that he is spiritually incompatible with.  They don't share the same values.  I'm not just talking about mine and his father's values -- I'm talking about HIS values!  We have raised him in the ways of God and He has chosen to walk in those ways for himself.  Needless to say I was in utter shock and disbelief at this wedding.  The only funny part of the whole dream was that after they were pronounced husband and wife Dustin popped out with a big sign that said, "FINE ARTS IS #1!" and ran around the sanctuary with it.  Then after doing a few laps with the sign, he ran over and gave me a kiss on the cheek and said, "don't worry Momma, everything's gonna be alright" while I stood there numb, feeling like my legs were going to give way.  This dream was real as day!!  I woke up covered in sweat.  During the dream, after he told me it would be alright,  I looked into his face and   felt faint and sick with grief, thinking, "son...you have no idea what you have just done...the pain that is ahead...and I can't save you from it."  I felt like I was watching him go off a cliff and there was nothing I could do.

This was a really long dream.  Following the wedding I stared at everyone I came into contact with wondering how they could continue to go on and live life as normal when such a devastating thing had just happened.  The wedding was Saturday and we had a guest speaker that Sunday and we were supposed to take him out to lunch but I broke down crying saying, "Larry, how can we take a guest speaker out to eat at a time like this?!"  It was all I could do to show up to church and lead but I did.  I left the church after service to go home by myself and bawl my eyes out while Larry took the preacher to a restaurant and was sitting there explaining to him, "our son has married a girl  who doesn't share his values or ours, and my wife is just feeling unable to cope with what's happened right now...please excuse her..."  Larry drove off with the speaker...

It was the wee hours of the morning, like 4 am when I woke up out of this dream. Whenever I have a dream like this, I just start praying for whoever was in my dream.  I look at it as God's way of telling me somebody needs special prayer.  If I'm wrong, no big deal -- it never hurts to pray for someone.  In this case I began to pray for Dustin, that God's will be done in His life and that no assignment of the enemy would succeed in his life.  The peace of God came over me and I went back to sleep.

Kids and relationships really have the potential to worry moms.  Because let's face it, nothing is more important to us than our kids.  I have had a lot of women talk to me asking for wisdom concerning their children and dating.   I am still going through this with my children as none of them are married, so I'm right there in the midst of the same journey, trying to keep concerns concerns and not let them turn to worry.  We know worry is unGodly and we are commanded in scripture to worry about nothing and pray about everything!  There are some practical helps that I give others that have helped us, but the main thing I tell anybody is to pray your guts out.  And then pray some more.  Pray the Word, pray specifically, add fasting to your prayers, and don't let up or give up!

In our case, it hasn't been all bad.  Now when I speak of dating, I refer to the boys only.  Savanna's not old enough yet.  The boys have been in relationships that would not have been a devastating marriage choice.  Sometimes a person can be a fine choice but for whatever reason it's just not meant to be.  We've gone through that.  And, in those cases where they have dated girls who share our family values, it's hard to let go sometimes, because you really grow to love and adore the the person!  And of course we can still be friends, and love one another, but it's not the same as when they were around us all the time .  We've also gone through our times where they have really been in the danger zone.  We have even experienced those who will even go so far as to hide their true beliefs in order to date them.  Thankfully prayer and fasting exposes this.

I know how dangerous this is because I have a friend whose husband masqueraded as a believer the whole time they were dating because she had made it clear that anyone who dated her would have to come to church with her.  He came, went to the altar and made a so called commitment to God, was there every time the church doors were open...until they got married.  Then he came out with the fact that he never really believed any of that but he loved her so much and wanted to continue dating her.  He said, "I knew if I told you I didn't agree with you on spiritual matters, that would have been the end."  (He was right, and it should have been!)   Because she doesn't believe in divorce she stayed married to him all these years.  Personally I think she would have qualified for an annulment but she didn't pursue one.  They have three kids together and she has dragged them to church and raised them in God's ways as basically a single mother though she is actually married.  The kids have always struggled spiritually because of the example of their Dad who is an agnostic.  What a nightmare.

Mothers, if you don't have a prayer life, NOW is the time to get one!!!   Especially when they become  adults, and they are making these choices on their own, not having a prayer life is like being up a creek without a paddle.  Spiritual warfare IS your answer and fortunately it's the most powerful.  I'm a strong believer that our children need more than just a mate who is a believer.  The Bible tells us not to be unequally yoked, but I believe you could both be believers and still be unequally yoked.   It's important to take the call of God, spiritual maturity, spiritual core values etc. into the equation as well.  Sometimes when hormonal young people see a hot body the last thing on their mind is the call of God or core values.  It's during times like this that a praying Momma is  invaluable.

When they are over 18 you may feel like you have no recourse, but the truth is all of heaven is with you as you call on God for your children.   Another thing I've learned is that sometimes when they are entangled in a relationship and to you things look bleak and inevitable, sometimes you're right on the verge of a breakthrough.  It's always darkest before the dawn.  Don't go by what circumstances say -- go by what God says.  Pray, fast, believe -- and don't stop.

Tomorrow I'm going to share a funny story about how I dealt with a girl who pressured us to allow one of the boys to date her when they were in high school...

Lisa N Alexander said…
Thanks once again for the reminder. Love you PD.
6:05 AM

Anonymous said…
As a Mom, I fight with that "spirit of worry" often. I need to reign in the worry to a place of healthy concern and rest in the Lord. Maybe it is because of my children's disabilities and their trust in people who could harm. I pray daily for the Lord to place that hedge of protection about them. This is a serious question...Are my feelings normal? I would covet your prayers for wisdom!
8:28 AM

Anonymous said…
Sorry to post again...but I failed to mention that your blog changes are fantastic! Just beautiful!:)
8:31 AM

Deanna Doss Shrodes said…
Please, don't be sorry! It's never a bad thing to hear from you twice in a row, or more. :)

Are your feelings normal? OH MY YES.

While the Bible says not to worry about anything, as Moms I believe our biggest universal struggle is worry. There is nothing like the bond between mother and child. In your case what you feel is magnified because of the unique challenges of your children and concern about them being taken advantage of. It is perfectly normal however in addition to continuing to be vigilant in this regard to watch out for them I would ask some women in your life who are intercessors to have them on their prayer list for this need daily.