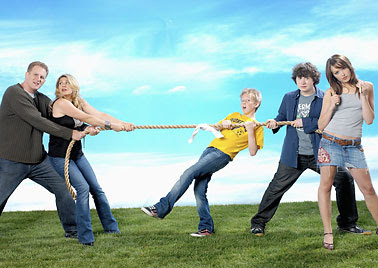 Here I am with the story I promised yesterday!  I know, you've been waiting on the edge of your seat.  ::giggles::

Right now at Celebration we're doing a series, "Courageous Parenting" on Wednesday nights.  Larry and I strongly believe that there is a crisis of courage among parents today.  Many parents lead their children by fear rather than principle.  May God break the spirit of intimidation off of parents and raise them up to lead without fear, even if they are dealing with high schoolers!!  We aren't called to be pals, we are parents.

There was a girl who wanted to date one of the boys in high school.  This went on for quite a long while.  He wanted to date her too.  But, she did not profess to be a Christian and please keep in mind, throughout this whole time by  his own testimony, our son  was a believer.  Not only was this girl not a person of faith but she was disrespectful and abrasive.  It wasn't just that she speaks her mind -- I don't mind girls or women who speak their mind...obviously  :)   There's a difference between speaking your mind and disrespect.  A big difference.

My husband and I told our son he was not to get involved with this girl beyond just being  a friend like he would any other girl at school.  At one point we learned they had taken the relationship beyond just friends and my husband took our son's driving permit away from him and said, "you will not get this back until you break it up with this girl."  (Yeah, we're hard core.  lol)

So this kept up and finally one day in my e-mail box came a long letter from this young lady very disrespectfully questioning our decisions as parents, our family values, and the fact that we forbid them to date.  I sat there at my computer just shaking my head at this ridiculousness.  Kids today  have nerve.    Honestly, in my generation this probably wouldn't have happened.  I don't care how much I ever disagreed with one of my friend's parents decisions, I would have never questioned them disrespectfully or written such a letter.  And I do not believe any of my teenage friends would have ever written a letter to my parents or given them such a critical questioning.  This shows the poor parenting of many of your youth today.  They have not been taught that it is completely unacceptable and dishonoring to do such a thing.

So she ended this letter with, "alright, what do I have to do to date your son?"

Since she asked, I answered.

I told her for starters she would have to begin meeting me for prayer at 5 am each day.

And...that was the end of that.

Anonymous said…
Wow, you're right they would have never done that in our generation...THanks for the ideas!!! I have four boys right now 7 and under..But in the mean time I'll keep praying!
Blessings to you gal
1:18 PM