When your faith goes off a cliff 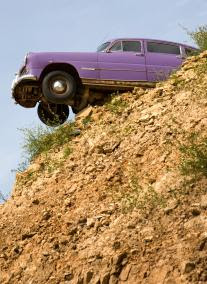 There were two truck drivers who were interviewing for the same driving job and the boss took each of them for a test drive.  The test was conducted on a winding mountain road and while they were riding along the boss asked the first trucker, "how close can you go to the edge without driving over?"  The guy said, "oh, I can get right on the edge of it -- I can get within an inch or so without going over...no problem!"  The boss took note.  Then he took the second driver out for a test and asked him the same question.  The second driver said, "I don't know how close I can get to the edge.  I've never tried it.  When driving on a road like this my goal is to stay as far away from the edge as I can."  The second driver got the job.

For those of us who profess to be Christians, we can make a decision to stay as far away from the edge of the cliff as possible or we can try to live on the edge, believing whatever our flesh longs to do must certainly be more important than Jesus.  (Of course the edge I speak of is not the edge of creativity, or adventure, etc.  I am speaking strictly of sin or compromise clearly spelled out in the Word.)  It amazes me what some people think they've "given  up" to follow Jesus.  Seriously!  Is that a joke or what?  None of us really know what it is to sacrifice, or we wouldn't be here.  We'd be dead.

In John 14:21, Jesus says, "Whoever has my commands and obeys them, he is the one who loves me. He who loves me will be loved by my Father, and I too will love him and show myself to him."