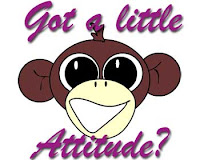 I've been teaching a class on "Attitudes" at Celebration, and yesterday I asked my class, "do you remember when you were a kid and your parents would say, "hey, watch your attitude"?  You probably rolled your eyes and said, "WHAT ATTITUDE?!  I DON'T HAVE AN ATTITUDE!"

If the response of my class is any indication, the majority of us did this.

We didn't even realize how bad our attitudes were back then, did we?

Kids aren't the only ones with this problem.  This week I talked with two adults who had really bad attitudes.  Quite honestly they are clueless about the fact that they have issues (and aren't open to correction) and really don't want to change.

There was once a grandfather who decided to take a nap.  His grandson decided to play a little prank and took a small dab of limberger cheese and put it on his mustache as he was sleeping.  The grandfather woke up with a snort and staggered out of his room and yelled, "Something stinks!"  He began going room to room and as he ran through the house he said, "This whole house stinks!"  A few moments later he ran out onto the front porch and he said, "The whole world stinks!"  All the while he never realized the problem was right under his nose.

To start changing your attitude, change what you think.  Our thoughts have everything to do with our attitude Proverbs 23:7 says, "For as a man thinks in his heart, so is he..."

Elevate your thinking and you elevate your life.   Find the source of what stinks in your life and deal with it.

Michele said…
thanks PD for the reminder-it's always nice to be reminded from time to time- I am changing my attitude and how I think -
8:49 PM