No grace for the PK 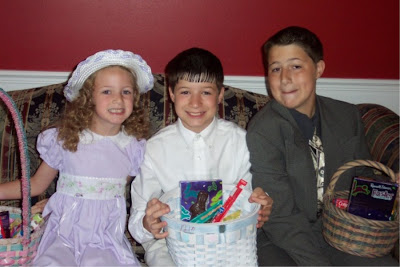 Something I never thought about before is that although PK's (pastor's kids) are immersed in ministry by virtue of their parents being in it, they don't receive the same grace to deal with issues as their parents do.  PK's don't ask to be in a pastor's home, they just land in it by virtue of birth.  They don't sign up to make the sacrifices, they just live them because they have no choice.  They don't surrender to the call, they just wake up and have to live the pastoral lifestyle that has been dictated for them already due to their parents surrender to the call.  Their parents on the other hand, having been called by God to pastor, and responding to the call, receive a special grace from God to deal with the difficulties of the ministry.  (Otherwise they would never make it.)  There are some perks to being a PK but the sacrifices usually far outweigh it, even in a good church setting like my kids have here at Celebration.  (And we are VERY thankful for Celebration Church, believe me!)

Like all PK's, my kids have witnessed things behind the scenes that are unique to ministry.  Because of some of those realities, my children never grew up aspiring to ministry.  Both Dustin and Jordan said many times  that they would never choose vocational ministry.  We accepted that fully and in some respects I even breathed a sigh of relief!  (I have to be honest, I didn't want my children to face some of the same stresses I have over the years  I'm not complaining, I'm just stating reality that it's a unique life and many can't handle it, that's why 1500 pastors resign each month and leave ministry permanently.)  This isn't my opinion, it's a well documented fact - just do a simple google search and you'll find all the sobering stats there.

My kids experienced some crazy things growing up that they needed to be emotionally healed from.  Dustin shared in one of his college essays about being healed at youth camp, from emotional abuse he suffered from being a PK.  Jordan was thrown across a room by an angry children's worker at one church.   I shared about both those things extensively in this blog post, which includes Dustin's essay.   Both boys remember one night at a previous church, when I had to grab them from the sanctuary put them in the car and take them home by myself while their Daddy stayed at the church because a business meeting (an illegally called one, to boot!) had blown up.  I can still remember plain as day driving home in the pouring rain with them in the back seat scared to death, saying things to me like, "Mom, why were those ladies acting so crazy?  What did they mean by all that stuff they were saying?"  I knew that night was indelibly imprinted upon their fragile minds forever.    And I hated it.  It wasn't so much at that point that I thought, "this will scar them from wanting to go in the ministry."  Forget ministry...I just wanted them to grow up wanting to serve God, period!  You can get pretty disillusioned about Christianity as a pastor or a PK, when you see so many so-called Christians who act like the devil.

Then there were other things like the first 15 years of our ministry when we went to McDonalds, got one drink and five straws.  Every time.    Now the kids laugh about it, but along with that laughter for many years they had said, "we'll NEVER go through that with our families."   When we moved to Florida the first question they asked when we were on the road with the moving truck was, "Can we all have our own drink now?"    Both boys always wanted to do something financially lucrative, and quite frankly I think most young people do want to choose a career where their family can be comfortable and won't have to have their kids on reduced school lunch tickets, relying on their grandparents to buy them school supplies or waiting another month to buy tennis shoes when current ones have holes.

Neither of my boys came to peace about the ministry until this past year -- I would guesstimate that Dustin arrived at the acceptance of his call last fall, and Jordan a few weeks ago.  One of the best thing that happened in Jordan's case was Tom Benigas coming and spending time with him last week.  Tom is the former district youth director here in Pen-Florida, having just retired this past year.  He's always  had an incredible heart for all of the youth but especially PK's, being one himself.   For our first eight years here he provided leadership for the wonderful youth and PK camps the kids were a part of that brought so much healing to their lives. When Tom first heard about Jordan's situation and his initial reluctance about ministry, he wrote me a note saying the following:

"Deanna, I have a similar story. I didn't want to go into ministry for the very same reasons. You and Larry get God's grace to deal with all the stuff. As PK's, if we get an attitude about it, there is no grace available. I experienced that first hand. I might be able to encourage him... I believe the hand of God is all over this."

Encourage him, he did!  He spent time with him last week and not only encouraged but just poured himself out, at times through tears, imparting to Jordan what God told him to tell him.  What a blessing.

Tom brings up a great point I just realized through his insight...while all Christians receive God's grace, there is a special grace God gives for specific calls or tasks.   PK's don't receive the same exact kind of grace their parents do.  You aren't given the grace to pastor a church unless you are actually pastoring it. And therein lies their ambivalence about following a call.  However if they are called and they do respond they will have that same grace as we received imparted to them to shepherd people and go through unique hardships.  That doesn't mean the road will be easy!  Grace just makes it possible.

I know most people who cause issues in their church don't really care about the PK's much less anything of real importance.  All they care about is themselves, which is why they act like they do.  But I wish people realized what their actions cause others to go through, even little children!  Especially little children!  Did those women at that business meeting ever consider that their actions would one day affect a young man forcing himself to go into the military, running from a call, because he wanted to do anything he could to avoid leading people like THEM or exposing his future family to them???

The children are watching...

what are we showing them?

Anonymous said…
Such a powerful post this morning! Do you feel that pastors need to pray for God to give this same grace to their children?

Your church sounds like ours...one that has strong leadership that has formed a hedge around the pastor's family. Growing up and seeing members "go off" at church, I always felt badly for their family and thought, "If that's how they act in church, how do they act at home?"
5:52 AM

Deanna Doss Shrodes said…
The grace that God gives a pastor/pastor's wife is the grace to actually pastor a body of believers. My husband has even noticed that while pastoring certain difficult people God gives him the grace to do so, but in the event that they leave or move or for whatever reason are no longer with us, he doesn't have that same grace anymore. I'm not saying he has no grace AT ALL, just not the same kind. There was a guy we pastored years ago, very difficult and when dealing with his idiosyncrasies, my husband had amazing grace while he was here. The moment he left and went to another flock and we no longer pastored him, when he would do something (which he did - sent e-mails or called my husband) Larry said, "the grace has lifted. Ths feels like a huge load to bear that I just can't deal with now that he is not in my flock..."

With that said, I don't think God is going to give a PK grace to pastor a church as they aren't literally doing that although they are serving, it's not the same. After hearing what Tom had to say, I believe God must have a special grace for people to handle being a PK. I'm praying for that grace to cover all of the PK's I know and for them to call upon Jesus and cling to Him rather than go the other direction. Thank you Ruth for being an example of somebody who did just that...

About the "how do they act at home?" you are so right!!! If they act that way at church, what in the world are they doing otherwise? Sheesh.

I do thank God for Celebration Church. They are very good to my children and part of their healing process- a huge part.
10:36 AM

Being called to the pastorate is no joke. My sister told my nephew, go to college and get a real job making real money. So much to say on this...
11:11 AM

Ryan said…
+1 to everything you said, PD. As a PK, I saw and experienced things that really put me through a gauntlet of confusion as a young Christian.

My parents current church in AZ was amazing to my siblings and myself, although any church will have some crazies coming through the door. Not many kids experience being yelled at in church for making normal-kid mistakes, or hear their parents get cursed out at their "job."

I really felt a burden to minister to other PK's while reading this. Great post as always.
11:43 AM

Deanna Doss Shrodes said…
Ryan, I believe you and my boys will have a huge impact on PK's in your ministry, having all the experience that you have.

Thanks for reading and for the kind words.
11:55 AM

Anonymous said…
Thanks, Deanna, for your sweet words. I'm almost 47 and it has taken many years to reach this point. Personally, I've had to decide for myself that I'm never going to let someone or some situation steal my joy in the Lord! I've had to literally tell myself that the nastiness that comes from some Christians is nothing but lies from satan. They are not truth. My prayer is that PK's don't take the 30 years it took me to learn that. Negativity is NOT from God. I've learned that the joy of the Lord ...literally... is my strength! And what brings a pastor pain is seeing the pain in their children...from the very sheep (or goats) that they are trying to shepherd.
I did pray for God to not give me a husband in the ministry. He isn't. (Not paid anyway. haha) Now, I pray, "Your will be done." Hey, maybe we'll be one of those couples that God calls in their
50's! LOL If that's what He wants, I'll do it. Being in the ministry is not an easy road to travel. But I know, Deanna, that God uses our past experiences to minister to those in our present. And God's using your blog, too! Love it...and you! xo
5:51 AM