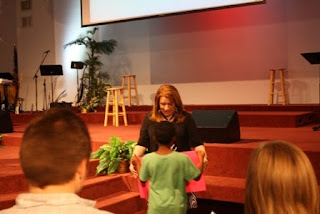 Yesterday there was a surprise for my birthday at church.  When Larry started preaching, he announced that  his message was called, "Life of the Party" and he said it was a day for special Celebration.  At that moment a bunch of ladies came through the back doors of the church with trays of cupcakes and they passed them out to everybody in the church in honor of my birthday.  They were told they could eat them right then, as it was a special treat that went along with the message.  Then the children from KidZone came down the aisles carrying balloons and a giant pink card they had constructed with roses on it, and then sang Happy Birthday to me, and presented me with the card and balloons.  It was just precious.  After the service was over they gave me a basket of cards people had collected for me, and a some people presented me with gifts that were just delightful.  One was a scrapbook Susan made for me of special occasions at the church with folks there.  I was so touched.  After having lunch with Lisa and Bernie my family came home for naps and then we spent the rest of the evening together at home, had Italian food and watched a movie.  Larry got me a gift of five amazing cookbooks from some of my favorite sources including A Taste of Home and The Pioneer Woman.  He also told me he is getting me an i-phone for my b'day however I told him to please reconsider it as I don't think I need it and don't want to spend the $.  It's a very nice gesture...I'm touched that he would think of it.

So those are all happy things I am rejoicing and thanking the Lord over.  On the other hand...

This is a rather challenging week as Jordan is scheduled to leave for basic training tomorrow.  This is our last day to spend with him.  We have to drop him off at MEPS tonight where he will spend the night.  He has really been struggling and needs prayer.  This is his last opportunity for service with the military.  Although he feels certain God is leading him this way and he is excited, he struggles with fear of the unknown and is so anxious he is feeling sick.   Yes, we've walked this road before.  Please be in prayer for him.  He goes through final processing in the morning and ships out tomorrow afternoon God willing.  We would be able to follow him to the airport after MEPS to say our final goodbye before basic training.  Thank you for upholding him, and us.

Anonymous said…
I'm praying daily for you and your family. I can't even begin to imagine how difficult this will be for you! May God give you peace and still your heart.

So glad you had a wonderful birthday. You'll have to share your cookbooks with us and let us know which ones you suggest we add to our collections!
10:00 AM