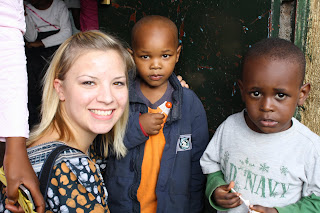 I'm blogging from London airport to re-cap our trip on Sunday to Mathare.Valley  There's a good signal here so I'll be able to post some photos.  There will be many more photos to come in the days ahead.
I am so grateful that Pastor Jane made time for us to come on Sunday afternoon.  We didn't get over to Mathare from Buru Buru until 4 pm, and she was holding 300 children in the kids church to meet us until 4 pm!!! What a good friend. 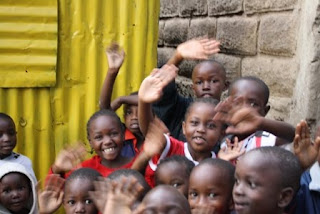 When we arrived the children met us at the gate waving, and clapping.  When we entered the completely packed kids church, they began singing a welcome song to us.  300 of the children had already gone home to their "homes" in the slums.  They had 600 kids for church that day (just kids -- that doesn't include all the adults that attend.  They have several thousand members when you put it all together.) Half of the group of children waited for us.  Becca and I gave them all candy that was collected for them from Celebration Church.  We also gave them silly bands and stuffed animals and more candy for their children's church prizes.  These will last for a little while and if it weren't  for churches like us they would never have anything like this.  The children clapped and smiled and even said (all together)  "Thank you, Celebration Church!"  Becca and I introduced ourselves and told them how much we and our church cares and loves them.  They sang us two more songs.  After that, Pastor Jane took us on a tour of the homes. 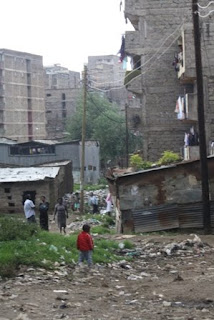 Mathare is a place I describe and even bring home on video but you would never have the full impact unless you go there.  There is no electricity, running water or clean water.  No toilets.  No sinks.  Raw sewage runs in the streets.  You smell sewage, charcoal burning (the only thing they cook with) and the smell of a drug/alcohol mix that they make.  The stench is UNBELIEVABLE.  But the people we reach out to have so much joy.  The children run and jump and play and give hugs and seem oblivious to the fact that they are living in a hell on earth.  "Homes" if you can call them that are dwellings that are about 6 x 8 feet with makeshift walls and roofs.  It's also a very dangerous area.  Extremely high crime, drugs, murder, you name it.  When we go we go with an entourage of young men who assist us.  My "son" Peter is one of them.  He stays by me and holds my hand lots of the time.  Three other young men assisted us as well as Pastor Jane.  We went to people's homes that they knew and they invited us in.  What you see is really beyond description although I try.  Large families live in these little "homes".  They have nothing to eat or drink but for a miracle. 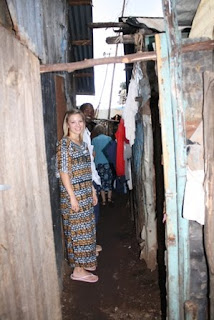 I went to Peter's home as I always do.  He has actually gotten some fabric hanging on the walls and Pastor Peter and Jane painted his outside shanty wall.  I told him how proud I am of him for the improvements he has made.  Although he lives in one of the filthiest and most dangerous places in the world, he has made the absolute best of his situation and lives as cleanly as possible.  His miniscule dwelling place was neat as a pin compared to any other one we stepped into.  I mean, it was still just a dirt floor,  a crude structure for a little tiny bed, a pail for fetching water from somewhere, a small makeshift table that was about 1 ft. by 2 ft, and that was all, as well as the fabric on the walls, but what He does have, he makes the most of.   Here you can see Becca and Peter walking through the slums in between the shanty's, there's just very small walkways. 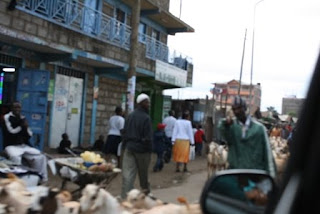 On the road in Mathare Valley we saw a HUGE herd of goats running down the street and several men herding them with large sticks.  They were Muslim men.  We wanted to get a photo of this huge herd of goats, only we were just driving by with our windows rolled down.  Becca took my camera to stick her head out and take a picture and a Muslim  goat herder tried to hit her and the camera with his stick but he didn't and missed.  It was because she didn't ask permission to take the photo, but please...we were riding down the street quite fast.  It wasn't like we'd stop and ask to take a photo of the goats.  Pastor Jane things like this are not uncommon.   We got a photo of this whole thing, as he was pointing to her as she held the camera, getting ready to lift the stick to strike...it's kind of blurry but you can see..he is right above the mirror of the car.  We have had many laughs over this as well as the fact that a boy in the slums proposed marriage to Becca.   He was just eying her up like she was property.  She was kinda scared and I said, "pleeeassee...did you really think I'd let something happen to you?"  No, not a chance. 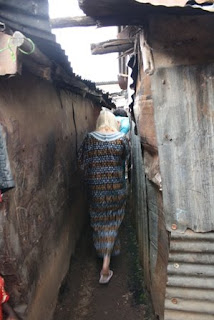 Leaving Peter was very difficult as usual.  This time we were pressed for time because when we arrived back at the church, the rain clouds had gathered and it was getting ready to pour.  We stood in the parking lot, embracing and crying and I told him what I always do... "Peter, just pray me back here as quickly as possible.  If I don't see you then, I'll see you in the air."  (Heaven)  The only consolation I ever have in leaving Kenya is that I know I'm going back, or the Lord will return and I'll be in heaven with all those people anyway!  Either way, it's a win-win.
We said goodbye to Pastor Jane T. as well and got in the land rover to leave and as we are driving out of there and I'm sobbing I suddenly exclaim to Barb, "I need an Advil!  I don't know why but  my head is banging!"  She says, "Well no wonder your head is banging, Deanna...this is a very emotional thing.  How can anyone not be affected this way even if they've experienced it before?"  When you see the slums and meet the people in person and you are there to touch your feet on the ground, smell the atmosphere, see the desperation for yourself...you just can't wrap your mind around it, and your emotions are turned upside down.  I quickly grabbed and water, popped an Advil, cried for part of the way back to the house (takes about 45 min-1 hour to get there due to horrible Nairobi driving conditions.) 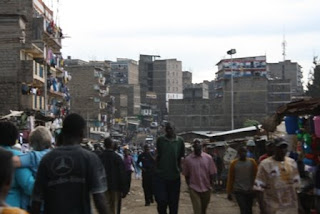 Yes, it affects me that way and it affects most people that way...as Barb said, "if it doesn't, there's something wrong with you!"  But even with it turning my emotions inside out and the ache I feel when I pull away, there is nowhere I'd rather be.