I only wanna be with you...

I thought for sure he'd want to go out to eat.  Aside from going to church and preaching this morning he said he wants to come right home and have a quiet day at home, cooking steaks on the grill and just being together.  He did want to have our friends the Riveras for lunch as well so they are coming, but aside from having these folks here, he just wanted to chill.

I was so tired after teaching life coaching yesterday -- I had been up extremely late the night before and that really wiped me out.  I came home after coaching and took a several hour nap and when I got up he told me he wanted us to plan to have Father's Day lunch at home.  This would require some work I wasn't prepared for.  Thankfully Savanna cleaned most of  the house and Larry ran to the store to get what I needed and I began to do some cooking.  He wanted steaks with my shrimp pasta salad (which is UH-may-ZING, I must say...anyone who has ever had it who is a seafood lover goes gaga over it...will post the recipe at the end here for anyone who is interested.)   We are also having baked potatoes...I make them the "Red Lobster" way by covering them with a mixture of butter/oil and coating them in sea salt.  Then I wrap them in tin foil and cook them in the crock pot while we are at church.  By the time we get home they are all done and smelling just WON-der-ful!  We're having some other veggies, and stuff that the Riveras will bring.  A great lunch is in store, and even greater company!

I went shopping for Larry's Father's Day present on Friday.  I was positively stumped as to what to get him.  He's an extremely hard person to buy for.  I have taken SO much stuff back the store that he doesn't like or can't use.  I get tired of going to customer service and returning stuff, quite frankly!  So after looking for a while I came home frustrated and said, "babe, I'm not going to surprise you...let's just go get you something that you can pick out yourself."  He said he wanted to do that Monday but I wasn't happy with that and said, "no, no...that will be after the holiday...I feel bad that you aren't geting something special on Father's Day."  And then he says, "I just want you."

I said, "what's different with that?  You can have me every day."

But evidently he doesn't get tired of me. :)

This past Mothers Day was possibly the last one for a long time that I would have all three of my children together in church, as Jordan is going into the Air Force any day now.  I didn't think Larry would have another Father's Day with them but God in his provision has kept Jordan home a few more months and now Larry will have a Father's Day tomorrow with all of them.  I am so grateful.  Perhaps for that reason it will be even more special that we are home all day and not going out anywhere but church this morning. 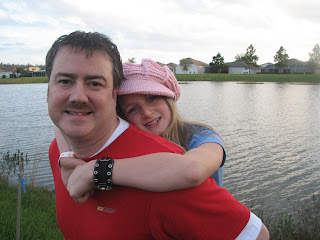 I am really blessed to have Larry as the father of our children.  He's the type of father who really enjoys doing things with them.  Whether it be going to a game together or watching Survivor or  going on a Daddy/daughter date...he really truly enjoys taking them places and doing things with them and generally being an extremely involved father.  He really gets into their world and is not content just to be a "Father"...but a "Daddy."  Here's to Larry and all the fathers out there who do more than just biologically father children, but give them the heritage of a Daddy who loves and cares for them always. 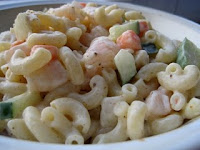 1 box macaroni or other kind of pasta you prefer (for today I used corkscrew pasta for something different)
2 lb. steamed shrimp (peeled, deveined)
1 green (bell) pepper chopped
1 yellow (sweet bell) pepper chopped
2 large tomatoes chopped
1 medium onion chopped
About 1/2 jar Hellmann's mayonnaise (I only use Hellmans...makes a major difference in my humble opinion.)
About 3 Tbsp Old Bay Seasoning or to taste
Cook macaroni according to directions.  I do mine "al dente" - do not overcook.  Drain pasta and rinse in cold water.  I get my shrimp steamed at the store to save time and just peel it at home unless they do it there at the store for free.  (Every store varies as to how they steam their shrimp and if they peel and devein it.  I go to Sweetbay most times and they will steam it for me in Old Bay but I peel it myself.  Note that I still add the same amount of Old Bay to the recipe even if they steam in it.)    Add all other ingredients.  I do not measure the mayo or Old Bay -- I do it according to consistency and taste.  Refrigerate immediately - keep cold and do not just leave this out for hours if you go to a picnic, etc. because it has the mayo and shrimp and you want to be careful.  This salad is very simple, the thing that takes time is simply washing and chopping everything, but it's SO good and of course the secret is the Old Bay flavor!   Enjoy.