She's changing the world as we know it! 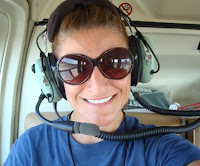 Yesterday, I said I would be moving on to write about happier things today, and as promised I am here to tell you about one of the greatest things EV-ER IN THE HISTORY OF THE WORLD.

My sister Shari moved to Charlotte, NC several years ago with no job, no nothing but FAITH, so she could follow her dream of working at Samaritan's Purse.  If any of you think I'm Godly at all, well... you should meet my sister!  She makes me look like a spiritual peon.   I'm serious.  She's got enough faith in her pinky to blow up Afghanistan.  The military should call her.  If she was in charge, by now we would have found Osama AND Jimmy Hoffa.

Anyway, she began volunteering  at Samaritan's Purse in hopes of one day getting a job with them.  That's right, she went there and worked strictly VOLUNTEER, being paid ZIPPO!!   She had nothing but a dream and serious dedication.  Her volunteer work with them did lead to several paying jobs however they were seasonal jobs or contracts just for a specific time period.

This past year her last position with them came to a close and it looked like her dream of working at Samaritan's Purse was over, as no new positions were available.  She was very discouraged, however totally open to whatever the Lord had for her and was willing to go anywhere or do anything He desired of her. She just continued to pray and wait and had friends and family do the same.

A few weeks ago, Samaritan's Purse called and told her they had a position for her in Haiti that would be a job lasting a month as their travel coordinator there, if she could pack up her entire house and put it in storage and find a place for her cat -- in two days time!  Yes. I. Am. Serious. 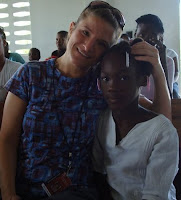 She did it!!!  (Well, the Lord did it, through her.)  She packed up her entire household, put it in storage, moved out of her apartment, found a place for her cat Pumpkin to stay, and was on the plane to Haiti in 48 hours.  She thought she would be there for a month...but they just asked her to STAY FOR A YEAR!!!

She's doing an amazing job there, and they just love her to pieces.  (Who wouldn't?!)  I was a little sad realizing I wouldn't see her for a year but the sadness was short lived when I realized how amazingly happy she is and how much she deserves all that's coming to her.  You can't even imagine what she's had to go through in life to achieve her dreams.

She is online in Haiti and reads the blog and facebook and I'm sure she's reading this today and just want to say how proud I am of you and how blessed I am to have you for a sister!!!

*Included in this post are two recent photos of Shari in Haiti, one as she's in a helicopter and the other in a church service with a new friend.

Ruth, PA said…
Deanna,
This is such great news! And what a blessing to have such a sister! Thank you for sharing.
Ruth
5:15 AM

Melissa said…
ok the first thing that popped in my head after reading this..."Mighty is our God, Mighty is our King, Mighty is our Lord, Ruler of everything!!" God knows the desires of our hearts and nothing can stand in the way of that when our will is lined up with His will! This is so awesome for her! PTL with you today!
9:26 AM