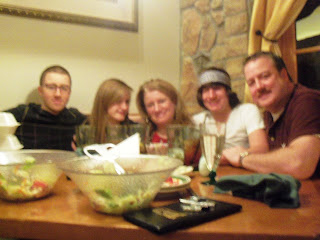 Here's a photo of us last night at the Olive Garden where we celebrated Savanna's birthday as a family.  I didn't realize the photo was blurry until we actually downloaded it this morning.  (Ugh!  I hate when that happens!  It didn't look that blurry when we checked it in the little window in the camera after the server took it. )
We normally go to Kobe for Japanese on family birthday celebrations, or we stay home if the birthday person requests me to make a special dinner.  However, Savanna said she's tired of the chefs at Kobe asking her why she's not eating all her food!  :::chuckles:::   She is a healthy eater, but not a real  big eater and they give so much food at a Japanese restaurant.  She usually boxes most of it to take home and eat later.  She feels awkward when they ask her every time  if there is something wrong with her food because she has only eated a few little bites of each thing.  So...her choice last night was for Olive Garden since she loves the breadsticks.  Come to think  of it I've never met anybody who doesn't like Olive Garden's breadsticks. In our family we always ask for a side order of marinara and alfredo sauce and we dip them.  Even so she probably ate three or four bites of salad, a bread stick, and 1/3 of a big bowl of spaghetti and meatballs.  And that was just enough for her.
After the dinner she wanted us to go to the movies to see, "Diary of a Wimpy Kid."  I loved the movie!   I laughed so hard in parts I thought I would fall off my chair.  Dustin had already seen the movie (he sees most things before we do, being supervisor at the Cobb) and he only rated it a 4 or 5, but I think it's at least a 7!!  I turned to him mid-movie and said, "what were you thinking rating this a 4?  This is hysterical!!"   It was the perfect movie to lose myself for a few hours in laughing about middle school antics.
In a few weeks Savanna will have a birthday sleepover with some friends and we are getting ready for that now, making all the plans for middle school girls to descend upon the house.  Should make for a very interesting night!   I know middle schoolers drive some people crazy but truth be told, I just love them.  Part of the reason is, I remember how hard it was to be in middle school.  And it's a million times harder now than when I was in school.  So, my heart just goes out to them.
I am so blessed to have times like this with our daughter.  I am more mindful than ever how fast the time goes, now that my boys are 19 and 20.   We have to treasure every day, every moment...