The school office has now seen me bra-less. 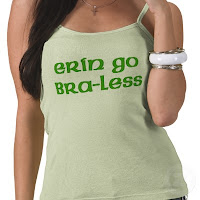 The Weightman Middle School office staff has now seen me without a bra on. Lovely.  And to further give TMI, I am one of those people that it is noticeable should I not be wearing a bra. [Sigh]  Please relax:  I was wearing a shirt of course, just not the proper undergarments.  :)  But still!!!

What a crazy morning I had yesterday.  It was THE Monday of all Mondays.   I woke Savanna up for school. Unbeknownst to me she went back to sleep, which never happens. I mean, the girl is up like clockwork, actually EXCITED to go to school EVERY BLESSED DAY OF THE SCHOOL YEAR.  I'm so blessed that she is a kid who loves school and absolutely hates to miss, and can't wait to get there!  She's on the honor roll too, every quarter.  (Go, Savvy!  So proud of my girl!)  Well, for once in her life, she went back to sleep.  Probably has something to do with the fact that we waited to adjust to daylight savings time on Monday instead of Sunday!  :)   I truly am not upset with her for sleeping, I mean she's pretty much the easiest child in the world when it comes to school -- (thus far, knock on wood...) and I have zippo to complain about.  Lesson learned.  Stuff happens.

But the bra-less part...that is what I'm writing about today.  This post is not about oversleeping.  It's about being bra-less when you don't want to be.  I thought she had already gone to the bus but she hadn't.  I was not showered or dressed for work yet, still in PJ's.  She burst in my room and said, "Mom, please take me to school, I accidently went back to sleep!!!"   So I am standing there in pj's, unshowered, unbrushed teeth, glasses/no contacts, and bra-less, but I said, "Quick, hop in the car!  Let's go and I'll get you there ASAP so you don't miss anything!"  And I left the house and got in the car ...exactly like that.  I never expected her to be late for school and since she has never been late, I wasn't exactly up to speed on the school rules.  Years ago I did drop the boys off  when they were running just a few minutes late and missed the bus but school hadn't started yet.   I got them there quickly and they just walked in with all the other kids who were arriving.  I have never brought the kids before when it was an "official tardy."  I just never expected my kid to be seriously tardy.  Okay so call me a perfectionist, but I don't bother to learn school rules that I don't believe my kids or I will ever break.

To say I was totally freaked out ........understatement of the decade.

Didn't want her to be later than she was. Didn't want to be late myself to work and this was already putting me behind. So I bit the bullet and walked in the school office like I was.  Oh DEAR LORD, what we GO THROUGH IN RAISING KIDS SOMETIMES!!!!!!!!!!!

I hope she looks back and "rises up and calls me blessed" for this.  Well, actually she will probably rise up and say, "Mom, was crazy."

Ruth, PA said…
I'm glad somebody else has those moments..."ODG (Oh dear God..) I hope no one sees me." Very funny Deanna, but I feel your stress! (Blessed/cursed with the same problem.) Just think of all the stories your kids will have to pass down! Seriously, you need to write a book about all your life lessons! Made me LOL once again! Today...I needed that!
{{Ruth}}
10:54 AM

Angie said…
and to think that my FB status yesterday was that I had just repeated my mother's history and ran Jonnie to the bus stop in my pj's....my whine....holds no candle to you, PD. You're the Momma! Savanna needs to submit you for a mom of the year award for that one, simply because it's so far out of character for both of you!
10:44 PM

Lisa N Alexander said…
OH PD! It's days like that, that make me wish the day were already over so I could start over!
11:03 PM