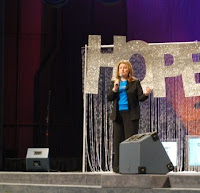 Almost every time I speak on the subject of marriage, I face relentless attacks from the enemy, designed to get me to stop.  I mean CRAZY stuff happens like you wouldn't believe.  I've been tempted to quit speaking on the subject because the fire of various trials got so hot.  But I've always pressed through and been so blessed that I did.  For some reason the Lord has really had his hand upon me sharing on this particular topic.  Believe me, I don't do so with an attitude of superiority or having it all together, but instead come from the place of one who has needed a lot of help in this area, and still have to work real hard on it.

Once again God showed me through many testimonies from this weekend how pressing through was worth it.  At the close of the conference, a woman approached me and said, "I just want you to know how your message changed my life this weekend."  She went on to say that she didn't know what the topics for the weekend would be but she just came expecting to get away with friends, and be refreshed.   Just days ago prior to coming to the conference, she had created a budget for "life on her own" without her husband.  She told him she was leaving him and filing for divorce this next week.  She came to the conference and heard my message and said that it spoke to her about many things she never considered before and she realized that her reasons for wanting to leave were not legitimate.  She said, "I know now that I am not supposed to leave my husband and I have decided to go home and give this marriage all I've got!  God totally got ahold of me this weekend, and I'm going home a new woman!"

Standing there in the lobby we exchanged tearful hugs and she said, "I don't know what you might have had to go through to get here and bring this message, but I don't want you to leave here without knowing my story and knowing that it's all worth it even if it was just for me!!!"  (I never told her or anyone that I went through anything but some people are just discerning to know that when we step out in faith to do what God has called us to do, the enemy will throw up every roadblock imaginable to tempt us to quit.)

The Hope Tour Conference is also going to be in Lake Worth and Jacksonville later this month as well and I'll be bringing the same teaching there.  The best is yet to come and I know God is going to continue to do amazing things on the tour, through everyone who is a part of it.

Lisa N Alexander said…
God bless you PD for all you do. What a treasure you are to the Body of Christ.

Anonymous said…
I enjoyed listening to your on Saturday March 6th @ the HOPE TOUR @ Calvary Assembly of God. I wish I could have gone to more of the classes, instead of just having to pick three. I would love to go to another leg of the tour.
6:50 PM

Dr. Deanna DossShrodes said…
Rachel,
Come on down! We'll be in Lake Worth next weekend. Why not get some friends and come to the next one?

Thanks for stopping by.