The following hysterical stories were sent to me this week from my dear friend, Pastor Sandy Phinazee.  She sent them along with a note that said, "please tell me this won't happen to us!!!"  Enjoy!!!


****************
An elderly Floridian called 911 on her cell phone to report that her car has been broken into. She is hysterical as she explains her situation to the dispatcher:  'They've stolen the stereo, the steering wheel, the brake pedal and even the accelerator!' she cried. The dispatcher said, 'Stay calm.   An officer is on the way.' A few minutes later, the officer radios in 'Disregard.' He says. 'She got in the back-seat by mistake.'

Three sisters, ages 92, 94 and 96, live in a house together. One night the 96-year-old draws a bath. She puts her foot in and pauses. She yells to the other sisters, 'Was I getting in or out of the bath?' The 94-year-old yells back, 'I don't know. I'll come up and see.' She starts up the stairs and pauses 'Was I going up the stairs or down? The 92-year-old is sitting at the kitchen table having tea listening to her sisters, she shakes her head and says, 'I sure hope I never get that forgetful, knock on wood...' She then yells, 'I'll come up and help both of you as soon as I see who's at the door.'

She walked up to an elderly man in a wheelchair.. Flipping her gown at him, she said, 'Supersex.'

He sat silently for a moment or two and finally answered, 'I'll take the soup.' 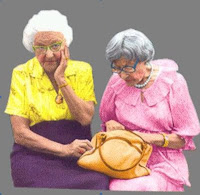 Two elderly ladies had been friends for many decades. Over the years, they had shared all kinds of activities and adventures. Lately, their activities had been limited to meeting a few times a week to play cards.

One day, they were playing cards when one looked at the other and said,

'Now don't get mad at me ... I know we've been friends for a long time, but I just can't think of your name! I've thought and thought, but I can't remember it. Please tell me what your name is..


*********************
Two elderly women were out driving in a large car - both could barely see over the dashboard. As they were cruising along, they came to an intersection. The stoplight was red, but they just went on through. The woman in the passenger seat thought to herself 'I must be losing it. I could have sworn we just went through a red light.'

After a few more minutes, they came to another intersection and the light was red. Again, they went right through. The woman in the passenger seat was almost sure that the light had been red but was really concerned that she was losing it. She was getting nervous.

At the next intersection, sure enough, the light was red and they went on through. So, she turned to the other woman and said, 'Mildred, did you know that we just ran through three red lights in a row? You could have killed us both!'

Mildred turned to her and said, 'Oh, crap, am I driving?'

Juleen Michelle said…
Pd. First try not to over think it like your blog this week. Know that you did your very best. Know that you instilled great values both Christian and worldly. People who meet Jordan will benefit from those values. After all the tears and thinking back of all the years take a deep breath breath and go into his room and decide what new color to paint it and decide what new room you want to make it. Maybe the dogs can have their own bedroom now. LOL You know me always making light of a situation. Maybe you will keep his room the way it is. PD sit back and just be proud.
10:54 AM