Dominoes is SERIOUS about delivery! 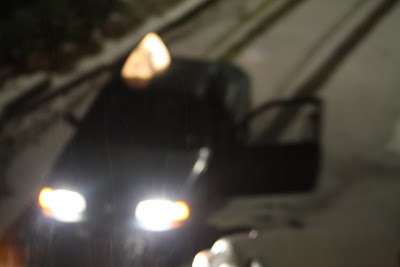 I want this blog to be a place where people at least occasionally learn something.  Here's your lesson for the day.  If you are going to go to a cabin in a remote location, traveling on steep and winding roads that may start to ice over, get groceries FIRST.

We made the mistake of going to the cabin first to inventory what supplies the kitchen already had before going to the grocery store...and when we tried to leave to get groceries, we almost died slipping and sliding on a trecherous hill couldn't make it.

Yep.  We were trapped.  This cabin is a wonderful place to be trapped, but we want something to eat while we're trapped.

There was a little bit of snow and ice very steep and winding hills leading to the cabin.  At first glance, this sprinkling of snow seems like no big deal, especially for a man who lived in Pittsburgh most of his life and navigated snowy roads.  But there was also ice along with the snow and when we tried to get back out we couldn't get back up the hill to get out of here. We don't have four wheel drive, snow tires, etc.   Larry called the owners of the cabin about getting some help and a maintenance guy did come and salt the road but when Larry tried to make it up the hill again he couldn't.

We had nothing here in the cabin but some tea and coffee that I brought, and no one who really knows me is surprised by this as I am never without access to those two beverages.  Please don't preach to me about addictions or idols in my life.   Larry called a few pizza places to beg them to come,  figuring they had four wheel drive and snow tires.  He was right.  Even still there was only one place who who agree to deliver and that was Gatlinburg Dominos.   Their delivery man is now the fourth person of the Trinity.  Larry told them he'd be willing to walk up the hill and meet the saint the deliverer so they wouldn't have to drive all the way up to the cabin if he didn't think he could navigate the hill.  And he gave him an extremely generous tip.  Yes, this was a man desperate for FOOD.   All he brought with him were his Zebra cakes, and even now those are rationed  to one a day.  Spare him the sermon about addictions/idols too. 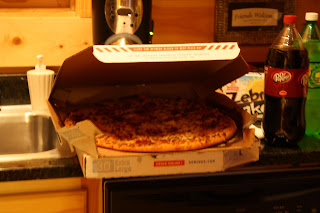 It's still snowing.  I told Larry to order a lot more pizza than just what we needed last night, plus some  wings and a few sodas, just in case were are trapped the whole time and need to survive on that.  He took me up on that advice.  It took very little convicing, unlike most other advice I give him.  I don't know if or when we will be able to leave to go to the store or anywhere else today.  Good thing we both love pizza and wings, and romping being together non-stop.  :)

We're blessed to have two fireplaces to keep us toasty warm, and have done away with alarm clocks and watches, and "must do's", and are enjoying being without all of our many responsibilities for just a little while.  By the way, I could do my work at NextJob from here if I were stuck here forever with no problem.  I have wireless internet and free long distance to anywhere in the USA.  I could be trapped and do NextJob...what a comforting thought that is and what an amazing job I have.  But, you can't be trapped and pastor a church. I really do need to get back to the church by February 21 so please pray that someone rescues us by then.

I know you are a prayer warrior. Please pray for safety more than anything. In all sincerety, I will gladly keep eating pizza if that is what my safety depends on. This is a seriously dangerous hill. I mean, I know I'm making light of it with my word cross outs as I normally do but seriously that hill is unbelievable. I did not mention this but it's basically a cliff, no guard rail.

Somebody is plowing right now and then Larry is going to try to navigate it again.

In the meantime I just had pizza and Dr. Pepper for breakfast. :)

Michele said…
oh my goodness - you all were to go there and relax not take on treacherous hills- please be safe- we want you back in one piece-
- snow should hopefully be ending soon
Love you
12:15 PM

Tina Blount said…
That last paragraph has Kathryn and Kristi beaming. Of this I am certain!!! Enjoy!
12:37 PM

Ruth, PA said…
I've been praying for you, sistah!! God has His hand on you both. His angels are surrounding you! Do not fear! If He can part the Red Sea, He can keep your vehicle on the steep narrow road. "When I am afraid, I will trust in You. In God, whose word I praise, in God I trust; I will not be afraid!"~Ps. 56:3-4
Much love and many prayers to you!
Ruth xo
1:30 PM

Dr. Deanna DossShrodes said…
Thank you so much for your prayers, everyone! A man (another saint!) came and shoveled the ice on the hill as well as salted so Larry could get up the hill.

The hill had never been plowed. He said it's a private drive and the snow plows don't do it. That is so crazy because I'm telling you this is such a steep and winding hill leading to the driveway and it's dangerous.

Finally late this afternoon he got up the hill and went to SuperWalmart for the groceries. I am making homemade vegetable soup...smells wonderful, as we are watching the snow come down as it has been all day.

We aren't going anywhere and will stay in at least til Thursday when it's supposed to warm up at least a little bit.

Again thank you SO very much for your prayers! I will blog with more pics tomorrow.
9:18 PM