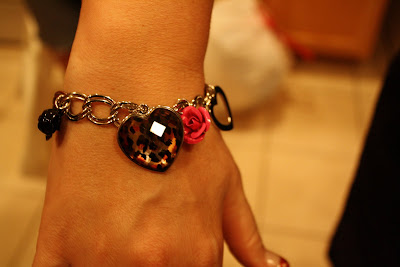 Just moments after the new year arrived and Larry ran over to kiss me, Candy met me in the kitchen and told me that Spanish people give importance to having or wearing something new as they go into the new year.  It serves as a "marker" as she called it that God is going to do something amazing in the new year.  Some people get something for themselves to commemorate this, but it has much more significance if someone special gives it to them.  It means something new is going to happen in your life -- something awesome.

After she explained all this she gave me a silver box with this bracelet.  She said she thought of me as soon as she saw it in the store.  Among other things, it has a leopard heart, and a a rose right next to it, both of which are very characteristic of me.  I fell in love with it and she put it on my arm and then we took a photo.  She said it was my "marker" going into the new year that amazing things are in store.  I believe it ~ I receive it ~ can't wait to see it unfold!!


Candy says that when she was a little girl, they would have to wear something new right when it turned new year, to go to bed.  They would get all excited about what they were receiving, what one new thing they would take with them into the new year.

I love my bracelet and more than that, I love the friend who gave it to me.  :)

Ruth, PA said…
I never knew this tradition. Our sons are Spanish...and I really think we need to begin this for our New Year celebration! :)
8:26 AM

Melissa said…
I love this! What a great tradition! I think I might have to start doing this too!
10:03 AM