Use your resources!
You are blessed to be a blessing!

- December 01, 2009
For a good portion of our married life we had little to no money.  We lived on the poverty level as defined by the government, and our kids qualified for free school lunches.  I always say Larry and I used to be too poor to pay attention!   I was always figuring out how to get the most for our dollars, or how to make things that we couldn't afford otherwise.  Most pastor's wives can readily relate to this -- even if they aren't living this way now, they used to at some point.

When we were first married I really wanted a Christmas village with a few little houses to display in our home for the holidays.  Everywhere I looked even the most simple ones were too expensive for what we could afford at the time.  Most days we were just concerned about basic groceries, let alone a Christmas village!  There were weeks where I would take one package of four chicken quarters and had to make that stretch for a week at a time.  I made this dish called stewed chicken and now to this day Larry won't eat it anymore because it reminds him when we couldn't afford anything else.  The dish was one I created and it consisted of four chicken pieces, onions, tomatoes and a few potatoes in the crock pot.    He appreciated it back then, but he doesn't even like the smell of that now...the scent brings back memories and suddenly he's afraid of going broke again.  Ha ha!  Those were the days... 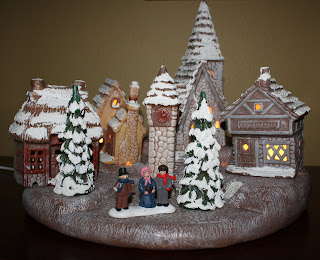 During that time I was thinking of ways I could have a Christmas village and decided to try to learn to do ceramics and I made this little village you see here, from scratch.  Yep, seriously.  The whole thing was just a few dollars because I made it myself.   I was so excited that year to display this in our house.  To this day it's my husband's favorite Christmas decoration.    I've shown it to you here with the lights on and off.   (Yes, I do realize the light is out on the little house all the way to the left...will be fixed soon.  If you want to see greater detail on these pics, just click them to enlarge.) 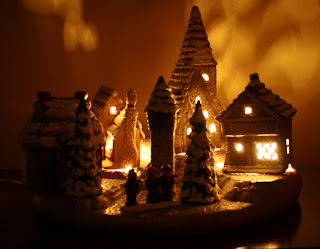 We have a lot of  gatherings in our home and the holidays are prime time for it.  Last year during some of the festivities the carolers got broken in half accidently.   Things like this happen when you have 100 people over and salsa dance.  So this year I repaired them and had them ready to be in their place again.  I don't hesitate to put special things like this out even with kids around or lots of guests, because my belief is, why even have special things if we aren't going to share or use them?  I explained to my Sunday School class this past week that I don't even have to wash the china in my cabinet each time we use it because we use it so much that it never collects any dust.  I have four sets of china, by the way.  I use them constantly in entertaining.  I didn't buy any of them.  They were all given to me as a blessing, because people know how I feel about hospitality.  I know the Lord gave me that china because when we were strapped financially, I still had people over for a cup of tea or lemonade and put it in our finest teacups or stemware, which were also given to me as a blessing.  This is the biblical principle of sowing and reaping at work.

What did Jesus say in Matthew 10?    41Anyone who receives a prophet because he is a prophet will receive a prophet's reward, and anyone who receives a righteous man because he is a righteous man will receive a righteous man's reward. 42And if anyone gives even a cup of cold water to one of these little ones because he is my disciple, I tell you the truth, he will certainly not lose his reward .  Even a cup of cold water  given in the spirit of being a blessing is significant!    In Matthew 10:9-15, Jesus commanded His disciples to shun any home which did not show them hospitality and equated hospitable treatment of others with treatment of Himself.  Since Jesus put an emphasis on hospitality, I do too.  There have been occasions we have used all four sets of china at once -- because we've had that many people over.  I believe as I'm a good steward of what God has given me, I will receive even more, and as Abraham, I am "blessed to be a blessing".   Some of you reading this don't have china -- you might just have paper plates and cups.  Great!  Use them.  Utilizing whatever you DO have is the point.  Hospitality is simply giving the best of whatever you have at the time.

Let's talk more about Christmas resources...back in those lean years, I gave everyone my homemade muffin mix in a jar with a special topper I made.  Most people said it was one of the best gifts they ever got and begged me to refill it after they made the first batch of muffins.  You don't have to spend a lot of money to have the "wow" factor. With the economy as it is and many people out of jobs, I realize money is tight and some people are really depressed. I just encourage you to first of all, remember the true reason for the season.  Yes, I know that's a well worn phrase but it's not just a cliche, it's TRUTH.

You will also be surprised at how resourceful you can be when times demand it.  I never made ceramics in my life the year before I made that village.  I am not even good at art.  Really, I'm not.  Musically creative - yes.  Creative with drawing or painting?  No.  But where there's a will there's a way.

There are some great sites like this one  and this one that will show you how to simplify your Christmas and by being resourceful, create gifts that show your love and care but don't cost a lot of money.  You can also think up creative ways to make things for your home at the holidays and other times that you may not be able to afford to buy, but can create by yourself or with the help of friends.   When I'm in doubt about how to do something, I often ask my friends for ideas.  As Pastor Rick Warren says, "all of us are smarter than one of us." Don't ever dwell on what you DON'T have.  Focus on what you DO have, and work with that.  God will bless it and multiply it as you give it.  This extends to anything whether it be a cup of cold water, a jar of cookies, a kind word.

Many years ago we were sitting in a church service and there was a young lady present who was brand new to the church.  She was in her first year of college and  the Lord spoke to me that night in service and said, "have that girl over after church".  I said, "okay...we're flat broke right now, Lord, and all I have is Coca Cola, and some bologna I got from the deli today."  And he said, "All I asked you to do is give what you already have."  So we had that young lady over that night and I lit the candles that were on the table, and presented her with a bologna sandwich on one of my china plates, and an ice cold coca cola served in my finest stemware.   That was the first of many nights of sowing into that young lady's life and throughout our pastorate there she became one of the finest leaders and teachers who ever served with us.  She also became an outstanding wife, mother, and hostess herself.   We often reflected back after many years had passed that it all started with a bologna sandwich and a Coke!

Incidentally, we do not live on the poverty level now.  God has blessed us and our church is so gracious in the way that they care for us .  I still believe in being resourceful and creative, however.   Even more so, I believe we are blessed in order to bless others.  The more I receive, the more I desire to give.  I don't have to give -- I get to give.  I am so happy to give of my time, my talents, and my treasure (financial).   The bottom line --

DaNella Auten said…
Money? hahahaha I laugh at you... (as my cell is turned off due to lack of payment, and the power company is calling daily...)
I would have thought it was store bought. You did a good job. I made a nativity this year out of Sculpey... Fun.
6:48 PM

Deanna Doss Shrodes said…
Oh sweetie, I am so sorry. Sincerely. It makes me sad that you are going through this especially at Christmas time. I will double the prayers for you and yours...I love you and I'm lifting you up.
11:07 PM