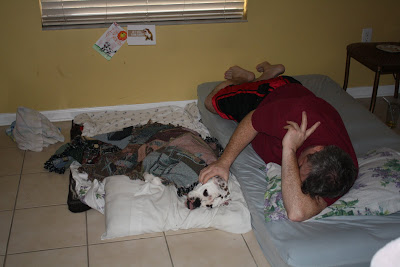 Jordan stayed up all night with Maddie.  Larry took over at 6 am and stayed with her until 10 am and left this morning just in time to preach.  It was the first time we left her, after putting the cone on her head, medicating her with Tramadol and putting her carefully in her kennel.  He came to church, preached and left right after service to go back and take care of her.  She did fine.  It was extremely hard to leave her but we had to be back at church this morning together.  Besides that Michele says we need to get her more into a routine of normalcy.  That is easier said than done!    We would have taken her with us to church but the veterinarian said she cannot leave the house for 10 days. 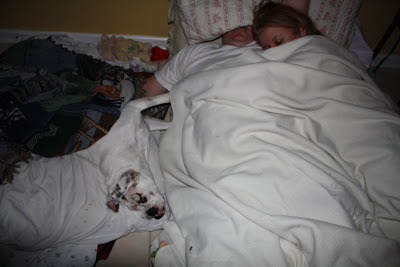 Taking an afternoon nap together after church and choir practice. 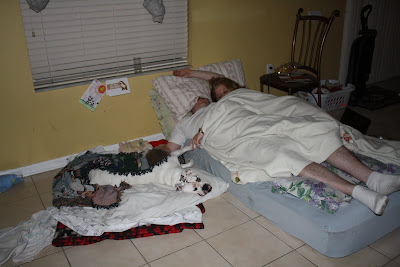 Hey, we sleep together when we can these days...LOL 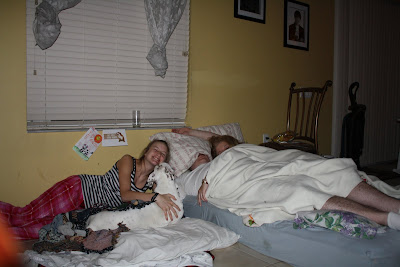 Savanna can't resist running over to give Maddie some kisses when she sees her eyes open.  She took these photos above and on the last one she set a timer so she could be in it.  That girl is quite simply brilliant!  :)

I know it's pretty evident to all, but Maddie's like my fifth child.  I say fifth because we already have one in heaven, our first baby, and then we have our three here on earth.  About seven years ago now I thought we were done.  (My husband still says we were done!  He did not/still does not want any more babies. )  But then Dustin turned 18.  And everything in my mind changed.  You see, I saw what an amazing human being he turned out to be.   As a Mom you second guess everything you do, and make a lot of mistakes and you wonder if the kids are really going to turn out alright.  Well, I wondered all that for 18 years because, well...I screw up a lot.

So then my oldest son turned 18 and he happened to become basically THE most amazing  young adult on the planet.  Then my second son turned 18 and well, he's made it too despite all my fears.  And my daughter is right on the heels of them just making me proud at every turn.  And I thought to myself, "why did I stop having kids?  These people are amazing!  I should have had more!"  (One of my mottos is "too much of a good thing is... wonderful!")  When Dustin turned 18 I really wanted another baby but it was too late.  Not only that but Larry didn't want another one, nor did he want to adopt.  So that was that.  End of discussion.

Then we got Maddie, which was totally HIS idea!  (I didn't want a dog at first -- I was against the idea.  But once we got her how could I not fall totally head over heels in love with this sweet baby?)  And all the love and attention I would have given a newborn baby, well, I just lavished on our little Maddie.  I rocked her to sleep, sang her songs incessently (never mind that she's deaf), held her on my lap all the time, took her to the office and let her sit beside me for hours while I worked, bought her clothes from Petsmart, took a bazillion photos of her and spoiled her rotten.   She's the fifth baby I was never able to have.

Seeing her in this pain and anguish has been indescribable.  The other day I told her I wish it would have been me hit by the car and not her, that is how much I love her.   Thank all of you for praying for our sweet Madeline.  Your prayers are working.  She is not out of the woods by any means but she is getting stronger day by day and we have all the faith and hope in the world that in three weeks and two days, she will walk, pain free!