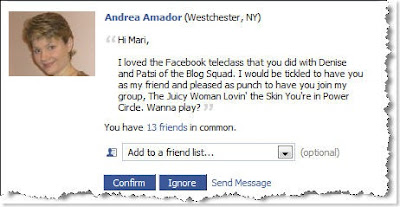 The other day on vaca I was sitting at the kitchen table having coffee and talking with my longtime close friend Mike Gibson. Among the myriad of topics we discussed, were things that puzzle us about social networking sites like facebook. There are many things rolling around in my mind about this so it won't be my last post along these lines, but today I specifically wanted to share my thoughts about friend requests.

I almost never request friends on facebook. It's not that I'm snobby. I figure if I know you and you are a part of my life and you actually have a facebook page, we are already friends or family. If I am not currently your friend on facebook either you don’t have one, (at least that I am aware of) or we are really not all that close in relationship. In contrast to me, Mike requests friends all the time even though he already has a lot of good friends and a full life.

Our conversation turned to the issue of people who we might be on awkward terms with who have requested us as friends on facebook. We both noticed this happening with ourselves and others we know. As an example, one person we both know circulated a petition against me years ago and recently requested me as a friend on facebook. Mike found it as odd as I did that they requested to be my friend. I would be a little uncomfortable to run into this person in “real life” although I don't harbor any bad feelings for them. We’d both probably just be anxious trying to figure out what in the world to say to each other if we both found ourselves standing in line together at a Starbucks, but on a social networking site they found it perfectly natural to ask me to be their friend. It leads me to believe that perhaps Rosie O’Donnell may even request Donald Trump or Elizabeth Hasselbeck as her friend on facebook. Why not? By some indications it appears that according to facebook protocol, the devil may even friend request Jesus sometime soon. I’ve learned that people who probably would never invite you into their home or choose to call you on the phone will ask to be your facebook friend. I’ve asked a lot of friends about this and every one of them have told me they have at least a few people who have friend requested them that they thought hated them.

Now by this observation I'm not advocating unforgiveness or bitterness. I fully believe we need to be careful not to be resentful. However, I also believe the fact that we might feel awkward around someone is different than harboring ill will. At this point in my life I hold no malice toward anyone in my life however if a certain people suddenly walked up to me, I think we’d both be racking our brains thinking what in the world to say.

My friend Mike believes folks like this are “reaching out for healing”. He believes they are using facebook as a tool of reconciliation. Perhaps. That has given me food for thought. And if they are, well then I think that’s great. Facebook might be a great uniting factor for some.
Other thoughts I’ve had about it:

Social networking sites help us to become closer to people we are already close to. It’s a very user friendly way to stay connected in just a few words a day or week, and the perfect place to share photos with those who are in our circle of friends and family. I love this aspect of it!

Second, it's a great tool for pastors and church leaders to stay in touch. I’ve heard countless others say the same thing. Facebook is a great way to update your congregation, and stay connected one on one or as a group. It's fun to leave encouraging message for friends, and remind people of events. I love it for that too.

But...what’s different about facebook that connects people that would never walk up to each other in a mall or go out to dinner with?

I’m not sure. Maybe Mike is right. Maybe some people are reaching out for healing. If so it’s admirable. Mike also says they might not be reaching out for healing at all, they may just be incredibly nosy and unless they become your friend on facebook they can’t read your page and talk about you even more all these years later. They have to get access to your page to have new fodder for their gossip especially if you have no other connection to them currently. And to that I say, man oh day, where do people find the time? Does anybody besides conservatives still work jobs? (lol)

Melissa said…
HMMMM...this is something I have thought about as well! I have had many friend request that I just scratch my head and think, "Huh, what, are you serious?!"
Personally I think that many people feel like they can either be someone they are not or feel like they can be who they really are without the worry of the face to face acceptance of people. I agree with Mike, that in some cases it may be a reach for healing but I would rather have a face to face conversation to heal a relationship!
12:40 PM

Aaron said…
A lot of good ideas why somebody asks to be your friend. I don't ask somebody unless:
1. I know them or
2. I know someone they're close to or
3. I knew them way back when or
4. I like them as an entertainer, sportsman, comedian, etc.
I don't accept a friend request unless:
1. I look at there page or
2. Know them personally or
3. I would like them to see the information I reveal in Facebook.
Typically I ask for requests more than receive. Now Twitter is different. People use that for marketing purposes. I click on the people following me and if they are just a person that likes stuff I do, then I leave them follow. However if they are just there to get you to go to a bad website or sell you stuff, I'll block 'em. Twitter is a way to witness. If they want to follow you then your update shows up on there home page! Facebook is more friend oriented. You do have to use a little discernment before you push accept!
3:18 AM

Anonymous said…
I am logged on to the former YP's computer so I can get some work done, so I stopped on by for a moment before tackling preschool schedules :o).

I rarely add people on Facebook - most of the time they find me first. I think Facebook is just an extension of the phenomenon of people who wouldn't give you the time of day in high school/college/whenever, and now give you a big hug when they see you, acting like you were always the best of friends.

My view on that is to just let them be delusional - doesn't bother me any!

People who have deliberately gone out of their way to hurt me? Not a chance. Like you, while I bear them no ill will, there is just not enough time in my day to get tangled back into their issues!

It goes without saying [and this is somewhat of a PSA for anyone who reads this] to NEVER add anyone you don't know. That's just dumb.

Ladonna said…
I thought Facebook was a wonderful tool until recently..... when people that were disatisfied with us or our church and moved on or elsewhere have chosen to broadcast their comments on facebook. The sad thing is people that are my friends and know these folks can their remarks. This past weekend my husband and I chose to remove ourselves from it.

It seems to me most folks just use it to be nosy and like you mentioned to gossip about others.

We don't need the drama as we have enough going on in our lives with situations to deal with.

Deanna Doss Shrodes said…
LaDonna, I have experienced that same thing. You are not alone. It's very disheartening, sometimes makes you wish the internet was never created when stuff like that happens. Pastors in other generations would never have to face a thing like that.

Although I've gone through it too, I like too many other aspects of it to give it up so I haven't. But there are times I do cringe and at one point the Lord told me specifically to "hide" certain people's comments on my news update (the scrolling thing that shows you who has just posted what) and to never look on their page, although I kept them as a friend just to avoid more drama since they are still connected with people in our church. [sigh] The Lord just told me not to read it because it is not, "true, honest, just, pure, lovely, of good report..." so I just hide the comments and read what He directs me is alright to keep reading, for my own emotional health. I hope that makes sense. You know my sister left facebook for a short time because of the same type of thing I think, but she recently came back to it and set her preferences differently so she'd only see certain things or only certain ones could post. I missed her a lot on there so I'm glad she's back but understood why she left for a while.

There's a crown in heaven for us for all this, sister...believe me...

DaNella Auten said…
I woke up about a month ago, in the middle of the night and suddenly knew I had to defriend someone... When I went to they had already unfriended me... so I unfriended his wife. I think they were just using it to spy on me...
Sad... I would like for adults to be adults...
10:28 PM