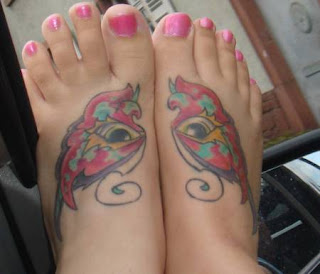 At 42 years old, I am a completely different person than I was at 18.

Friday night when Larry and I were away at Safety Harbor for our anniversary he surprised me with our wedding video on DVD. We were married in the old days before DVD and our wedding was recorded on VHS. Larry had Pastor Trinity transfer it over to DVD and presented it to me in our hotel room the other night. We laid there watching it and several times I turned to Larry and said, "who are those people?" In 22 years we have grown so much that at times I don't even recognize the people we used to be. Watching that DVD is like watching someone else now.

That's a good thing. I hope in 22 more years I can look back at a DVD from 2009 and marvel at the level of growth and change in my life. Some things are purely cosmetic, others deeply intimate.

I used to be a brunette. Now I'm a blonde.

I used to have two earring holes. Now I have five.

I used to never, ever wear open toe shoes. Now they are all I wear with rare exceptions.

I used to wear pantyhose everyday. Now I never wear them and absolutely loathe them.

I used to have long full hair almost down to my waist with the top teased up in a true 80's style. Now although my hair is still very naturally curly, I flat iron it most days. It's up to my shoulders, sometimes much shorter. Last year I even had it so short it was shaved in the back.

I used to bite my nails down to little tiny nubs almost to the point where they bled. Today I meet many people who have actually asked me if I've ever thought about being a hand model.

These are just a few of the hundreds of changes I've made in twenty two years and the spiritual changes would take me many hours to tell you about so I won't even start.

Why am I against the idea of tattoos? Because I hate anything the restricts freedom and the power to change. Years ago I swore up and down to my friends, "I will never, never, never be caught dead in a pair of bell bottom pants! Mark my words, I don't care if they are in style, a pair of those will never be on my body!!" All this was said while wearing my high waist straight leg Levi's. Guess what? I don't own even one pair of straight leg pants at this point in my life and my favorite pants are extremely wide leg. Thank God pants are not a permanent fixture and can easily be changed depending upon ones preference at the time. Can you imagine if someone sentenced you now and forever more to wearing the same pair of pants for the rest of your life? That to me would qualify as one of my all time worst nightmares.

Even our eye colors are unrestricted these days. Through contact lenses people alter their eye color anytime even if they don't have vision problems.

Haircolors are even more varied. It's a running joke at our church, "If you've only seen one shade of Pastor Deanna's hair, you are definitely a newcomer!" One of these days, I'm going to highlight my hair pink, like my friend Bobbie Hall. I know Larry won't like it but the beauty of it is...it's TEMPORARY.

We all crave these things in our lives. The majority of people on the planet do not like feeling boxed in and in fact will fight voraciously to break out. "Don't put me in a box!" they say. People naturally hate restrictions. Containment is horrible for most. This is why for the life of me I can't understand why so many people are willing to brand themselves permanently. Having a tattoo makes it almost impossible in some cases to reinvent yourself. It doesn't seem such a big deal at 20 years old, in fact I think people might even make it a decade or more without a regret. But at 30 or 40 it's suddenly becomes real important to have the latitude to have a transformation, physical or otherwise.

No matter how much you grow and change, this one thing will forever remain the same about you. If you tattoo your husband Joe's name on your shoulder and ten years later he cheats on you and has two kids by another woman and moves 1,000 miles away and becomes your worst memory, too bad. No matter how much you try to forget him you will always have Joe there when you look over your shoulder. If your grandpa dies and you were particularly close to him and you have his initials or some other meaningful symbol tattooed on you, you now have a reminder of his death on your body at all times. It seems strange that anyone would want to focus on a person's death or absence to the degree that it's literally on them at all times. I love and respect my grandmother and miss her more than anything in the world. But to be faced with the thought of her absence everytime I get out of the shower in the morning? Consider gravity as well. It happens whether we like it or not. No matter how much I work out, my body is going to change at least a bit and I really don't want a saggy butterfly on my butt in 20 or 30 years.

The tattoo business is very big, indeed. But the tattoo removal business is too. It's not only expensive, but it doesn't 100% remove any reminder of the tattoo and make your skin like it was before you had the tattoo. Don't take my word for it, consider what Dr. Bruce Katz, director of the JUVA Skin & Laser Center in New York, says: "Removal typically requires six to eight laser treatments, depending how deeply the tattoo has penetrated the skin. The charge, which isn't covered by health insurance, ranges $400 to $600 per treatment at JUVA Skin, depending on tattoo size. That can mean a total bill of $2,400 to $4,800. Most people who decide to remove their tattoos are in their 20s through 50s. I had one guy come in because he had his old girlfriend's name tattooed on his bottom and now he has a new girlfriend. Usually they have it done in high school or college, get out in the business world and realize it's not appropriate. Even if customers are initially satisfied, the image's look changes over time. With aging, a lot of people notice the tattoos become more blurred or bleed into the surrounding skin and become less attractive. That's another reason they want to have them removed."

On the issue of employment and how tattoos affect it, I don't have to quote another expert. Many of you know, I'm a certified career coach so I do know something about what it takes to become gainfully employed. Whether a hiring manager ever admit this or not, tattoos DO affect employment possibilities. Your career choices are limited if you have visible tattoos. Why anyone would want to limit their vocational choices is beyond me. It's difficult enough to get a good job...why make it even more of a challenge because you feel you just have to have the chinese symbol for peace on your forearm? Seriously.

For me, this is not an issue of right and wrong, but of wisdom. The Bible says a lot about wisdom in fact it says in Proverbs that above all else, get wisdom! There's a lot to be said for not just considering right and wrongs in life, but things that are also wise and unwise.

The more I grow, the more I realize that what I wanted at 20 is radically different from what I want in my 40's. I believe I'll go through another metamorphasis before I'm 60. It's that way for most women or I would say people in general. That's why I cringe when I see a someone make a decision that can never be taken back. If they don't change over the years it'll be alright, but the chances of that are slim to none. I'm sure everyone reading this can name somebody who got a tattoo twenty years ago and is perfectly still content with that decision. But for every person who feels that way you can name others who wish to God somebody would have talked them out of it.

Power to change! Power to choose! Power to be different today than I am tomorrow! What a gift!!! It's a gift I wish people would consider more before doing something they can't fully take back...ever. Some would undoubtedly rebut this with, "freedom is important...so important that one should have the freedom to get a tattoo if they so desire!" Agreed. My point is not that people should not have the freedom and choice to get a tattoo, only that I believe at some point years later they will more than likely greatly regret having exercised that choice whether they ever admit it aloud or not. Usually they don't admit it, as it would hurt their pride too much after people like me or their pleading parents admonished them not to.