I got a tattoo 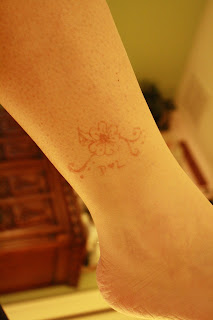 No, not a permanent one!

Those who have known me longer than about five minutes know that I'm not a tattoo kind of girl. But this was for a good cause, and won't last long.

The other night at the "Improv Night" sponsored by the youth group (to raise money for their participation in national fine arts) they were offering henna tattoos as part of the fundraising of the evening. As soon as I walked in the door a few youth began pleading with me to take the plunge and do it. Since it was for such a worthy cause, I acquiesced. I ended up selecting this little flower design and asked them to put, " D & L" on it. I am not sure how long it's going to last but so far it's been four days. I understand it could last weeks or more.

Yes, I know I need to shave my legs...again. :) It was almost midnight when I took this picture and I haven't done them since this morning. I'm one of those unlucky gals that has to shave every day. [sigh]

I'm against the idea of permanent tattoos, by the way. And not for the reason you might think. It has nothing to do with the Bible or Christianity. Tomorrow, I'll blog about it and tell you why. In the meantime, anyone want to guess why I feel that way? If you are a young person I have given a lecture to about this...don't answer. :)

Aaron said…
I am against tats because:
1. It's permanent
2. It defames God's creation.
3. It's permanent!
4. How many guys have their girlfriend's name on their body and no longer have her as a girlfriend? How does the new girlfriend like seeing that? Bad decision!!!
Is your reason close to this?
6:00 AM

Anonymous said…
Is it because there's nothing on earth that is worth the pain of getting a tattoo and dealing with needles that you would want permanently embedded in your skin so you can watch it fade and sag when you become an old lady?

DaNella Auten said…
I'm alergic to pain... I couldn't do it.. Also, I don't want what starts out as a rose on my breast and ends up a long stem rose...
I want a henna tat one day... or one of those simi perminant at a theme park, but NO NEEDLES!
9:45 AM