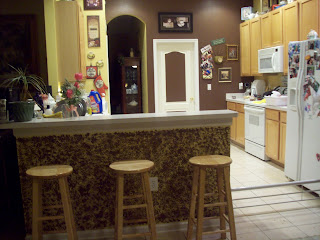 Well now that we've been to church it officially feels like we're home.

Last night I enjoyed being back in my big tub, in our bed (THE most comfortable in the world), in my shower this morning (seriously, it's amazing -- a water pic with a bunch of different massage settings) and then being back with our precious people this morning at church.

There were lots of surprises in store. While we were gone they did a major amount of remodeling, decorating and cleaning. They had a major workday in our absence and in addition to the nursery almost being done, two bathrooms were completely re-done with a third close to being done, painting done outside, pressure washing, new flower arrangements and more. Wow, what a blessing. Candy and Janice called this project "operation face lift" and said there are three more on the way. Can't even imagine what's next! We are all excited about what God is doing in and through His church.

Had a great choir lunch and practice this afternoon (I missed them so much!) and then I went home totally exhausted. I wanted to just sleep but we were totally out of groceries. I went to the store and picked up enough for the week and started out by making chicken fettucine alfredo tonight. We have missed home cooked food so much. We had it at Mike and Donna's and when we were with Kim, and also at my in laws. However aside from those three times, we had to eat out every time on vacation. It did get old. I didn't miss the cooking/cleaning up aspect but I did miss the food itself and particularly craved Larry's spaghetti. He was too tired to make it today but thankfully we had Italian food for lunch at church and it was all home cooked by our people. I had some amazing spaghetti and lasagna. Then about six or seven hours later I came home and made a big dinner. I am so excited about homemade food I already have tomorrow night's dinner cooking in the crock pot. :)

The week is taking off like a rocket. I have so many initiatives I already feel overwhelmed and haven't even really started yet. With a women's event on Friday I really don't have a day off this week so thankfully I've already just had a vacation!