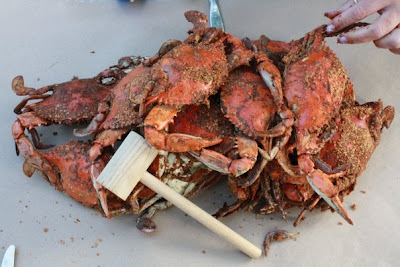 Part of the bushel of crabs we finished off
the other night at my sisters... 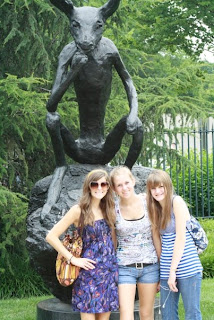 Today is the seventh day of our vaca and for once in...well, never...we are not going to church on a Sunday morning! We always go to church, even on vacation. This year is no exception ~ we just chose to go on Saturday night instead of Sunday morning. Last night we went to National Community Church in Washington, DC, pastored by Mark Batterson. We went to the service at their Ebenezer's location. It was really awesome! We loved it. We got our coffees and lattes and headed in for the service. The worship was phenomenal. Dustin particularly enjoyed it as I knew he would. The message was on compassion and it was excellent. I really enjoy going to a different church when we are out of town and getting ideas of the way others do things and also just being refreshed and renewed and taking it all in. I do however, miss home and our church because there's nothing like home! I know they had a

great service there although I haven't talked to anyone there yet about it I have confidence in our people that it was phenomenal. 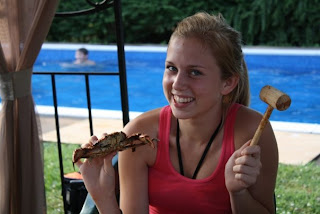 We took the metro to DC yesterday and did some sightseeing in the Smithsonian before we went to church. Larry and Savanna and I went to the First Ladies exhibit. I loved it!! The other kids went to an exhibit about Lincoln. After sightseeing we hopped on the Metro to go over to church. Afterwards we stopped on the way home for free slurpees at 7-Eleven. They were having some kind of special thing yesterday where they gave them away. Normally Sheetz in my favorite icee in MD and all I would get on vaca, however, hey this was F-R-E-E! And there's nothing better than free!!! 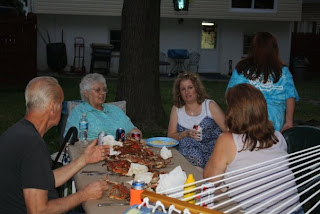 Since we went to church last night, today we slept in and are heading into Baltimore City to spend time at the Harbor. This will be the first Sunday in my life history that I have slept in! Upon waking up and snuggling with my babe, I took a few mile walk and now we are getting ready to head down into Charm City (Baltimore) for a day of fun at the Baltimore Harbor. That is one of my favorite places in the world. There is nothing like home (Tampa) but also nothing like my hometown (Baltimore). We are getting our f

ill of steamed crabs, Utz potato chips, Sheetz orange cream icees and nachos and much more. Emmy experienced her first Maryland crab feast. See above photo...my sister Kim gave her lessons on picking crabs. My sis is an expert and can clean out a crab in two seconds flat. Em loved them!

A change of pace is good. Now, off to Charm City...

Anonymous said…
Sheetz started in Altoona, PA, 15 min. S. of us! Great chain. All their sandwich meat is made by Kunzler, where mt hubby works! Just love seening all your visits this week!
Ruth
1:46 PM

Anonymous said…
Weird - I was watching Ace of Cakes just as your blog post came up! Glad you're having a blast!!!!
5:16 PM