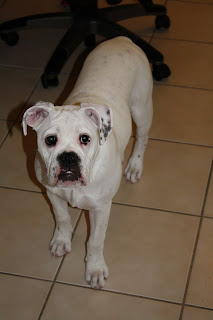 Woke up this morning to Maddie running in the room, putting her face in mine and pawing me to get up. I was so tired but knew I was in the home stretch of this week.

Went to the office and finished cleaning out a bunch of stuff. Yes, I have gotten around to cleaning my office. I thought it would take me til the end of summer but I simply decided, I'm taking the time and doing it. I still have some more old stuff to clean out but by and large I am almost done cleaning. The offices were even steam cleaned today. In addition, I threw away a bunch of old things some of which quite honestly were not good for me to have in my office. By that, I don't mean anything sinful. I'm talking about some memories which probably weren't the best for me to hold on to. So, zap...gone. Feels awesome. I still have a few more things to get rid of but I'm well on the way. It's a new day, a new time...

After work I met my friend & church member Jenn for dinner at Weck's. We haven't been able to do this for a while with our schedules, particularly with her working on her masters in leadership right now but she had a night free tonight and we scheduled it a while back to make a point to get together tonight for a long dinner and catch up. Great food, but more than that phenomenal conversation. I really need nights like this for my mental health more than anyone would ever realize. With some people (like Jenn) you just feel so lifted up after a conversation. By the way, I miss my daughter! She's been at Jenn's house all week but she's having a blast!

Came home and watched a movie with Larry and now just chilling and thanking God for some rest. I have one client meeting in the morning but other than that I'm home free and I am going to seriously enjoy some hours off tomorrow.