What happens when your dog eats half a huge bag full of Easter candy? 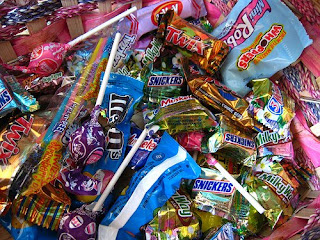 In ministry we have to learn how to be "instant in season and out" but also really in anything we do in life if we are to be successful, I believe that is true. I have been working on a project for my career coach job (which has now expanded - I am also recruiting/training coordinator there as well now) and in this new role I had a project assigned that was due this Friday. I've been working hard on it but it was only about 2/3 done this morning. Mid-day our COO (Chief Operating Officer) contacts me and says, "I am in the midst of meeting with a client and need whatever info you already have ready on that project..." My heart sunk because I knew I would be giving her something that was like a cake that was 1/3 unfrosted. But I had to, so I did. I had a delightful idea last week to add something unbeknownst to them to the project that would add some extra pizzazz and I was hoping for the grand unveiling Friday but it was sort of a good unveiling rather than a grand one. Still she said I did a great job on the project even as is. However, it needed major tweaking as what they've discovered we need and the idea I was originally presented with has changed a bit. No problem...adjust we must. You know what they say, "those who are not flexible shall be broken..."

I think the project time will be extended because it's become much more extensive now so looks like I'll be working on this next week too by all indications, which is alright by me.

Amidst that I'm working on a bazillion things for church as usual as well as Jordan's graduation. Yes, he graduates on May 30th (PRAISE THE LORD!!!) and we have a big party planned. Today I bounced back between working on my NJ (company) project, church projects, and a multi-media presentation for Jordan's graduation party that Pastor T (God bless him) is helping me with. It's going to be so awesome. I'll try to post it here once the party is over so everyone can see it.

While doing all this today Maddie got sick. It's partially my fault. If I am home she is never in the kennel. I like for her to be able to run free and don't ever like to cage her in unless we aren't home. So when I wake up I shut all the bedroom doors and just let her run in the common area of the house. Today I got very busy with my projects and was oblivious to what she was doing. She was able to jump up on Savanna's door and open the knob. Yeah, seriously. She went in and got Savanna's bag of Easter candy from her room and tore into it and ate half of the bag of candy including chocolate, multiple lollipops, tootsie rolls, smartees, etc. This was a HUGE bag of candy as we had this Easter march at our church where the kids got tons of plastic eggs stuffed with candy. It would take a human months to eat all this. Maddie tried to ingest as much of it as she could possibly stuff. Just as I noticed it and started to clean up the colossal mess, blecccckkkkkkkkk, she throws it all up. Ughhhhh!!! It was horrible. So I get that mess cleaned up. Then she goes unbeknownst to me and starts eating out of the trash can and just like that eats a photo. Seriously. I wish I were kidding. Well the poor dear has done nothing but throw up today. Multiple times. Hopefully it's over now and we can move on to have a good day tomorrow without her ingesting anything she's not supposed to. I will be every so grateful.

After cleaning up puke multiple times I went and put her in the kennel and headed out to bike for about 6 miles. It was raining out but I just needed a break. Then came in and showered and cleaned up and had dinner with Larry, Dustin and Savanna. Jordan had to work tonight.

Tomorrow is a new day to get a myriad of things done and hopefully my dog will not eat anything she's not supposed to and we can coexist peacefully.

Anonymous said…
When we got our dog, she ate a cassette tape. We discovered this when we found piles of "plastic tape vomit" in corners of the house.

[The funny thing is, this was a recording of a word that was spoken over us at my home church on a visit (very small church, 9 years ago - hence the cassette and not a CD, lol!). My husband said, "Gee, I hope that the pile of vomit isn't prophetic, too!!!"]
9:05 AM

Anonymous said…
Our cocker spaniel ate a platter of Christmas cookies (enough to serve about 15 people) through the night many years ago. They were in the middle of the diningroom table, covered, but someone left a chair out. So she hopped right up and had a huge snack LOL ! My poor hubby had the same mess you cleaned up. What is it about dogs? They'll eat anything and never know when to stop!
Ruth,PA
9:07 AM

DaNella Auten said…
Hmmm I think I posted on facebook that you must be really busy... Just had a feeling, and was praying for ya! But hadn't read this until today.
9:22 AM