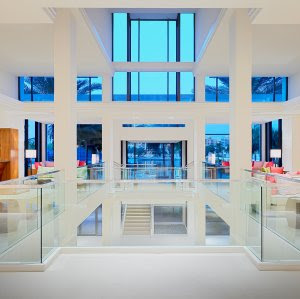 My life was really changed on January 17 of this year. Sitting right here in this room that you see pictured to the left.

Lots of times here on the blog I have said things like, "there's something going on in my life...can't disclose all the details right now but God is really doing some big things..." or "something new is happening in our church -- it's not public yet but it will be soon..."

I'm always sincere when I say those things and never just blowing smoke or trying to seem mysterious. I always end up sharing whatever it is eventually but I don't always go back and link my first comments with it, to show you what I was talking about back then. So, I'm here to share a backstory today and connect the dots for those of you who are faithful readers.

Back on January 17 I blogged about something amazing that happened for me that day that changed the course of my life. I had been feeling very sick at that time and although we had a district women's ministry reps meeting in Sarasota (which I normally would never miss) I told our leader I was feeling too sick to come and was unable to drive. My friend Joy Conley who is also a rep insisted that I go and said she would come pick me up. Reluctantly I agreed and pressed on to go. I had no idea what amazing things would happen that weekend. First of all, the Lord really moved in a supernatural way in the reps meeting. Second, something else totally unexpected - a divine appointment of anther kind - was waiting for me. And in response, this is specifically what I said that day on the blog:

I pressed through and went to our meeting in Sarasota and basically all I can say is MY ENTIRE LIFE HAS BEEN GREATLY ALTERED AS A RESULT OF THIS MEETING. I hate to blog about something and then not blog about it, but truth be told I cannot tell everything that happened for me during the weekend because some of it is confidential right now."

What happened for me that weekend? Well, in the lobby of the Sarasota Hyatt hotel I struck up a conversation Tina, who is now my boss at the company where I am career coach/recruiting and training coordinator. As Joy and I were sitting with her there on couches in the lobby of the Hyatt Tina said to me, "you're hired!"

I. am. serious. It really WAS that simple.

Thank God I have people with me when I experience things like this or they'd never believe it.

That night I went back to my room at Hyatt, texted Larry and said, "save some significant time with me to talk when I get home. I have major news." I didn't want to tell him on the phone. It was too involved and I needed to explain it all in person. As soon as I got home I shared it all with him. A few days later I had an interview with the C.O.O. and then a second interview about a week later (which were really formalities) and the rest is history.

Some of you will remember how sick I was leading up to that weekend. I had been through every medical test you can think of to find out what was wrong. The enemy did everything in his power to keep me from going that weekend. But my friend Joy was listening to God and called and insisted that I go. My purpose that weekend specifically for women's ministries. I was not there for an interview, and had no idea any of this would happen. But God did.

Sitting on a couch in the Hyatt, my whole life as I know it changed in an instant! Don't ever doubt, God knows everything about you and he knows how to put you in the right place at the right time, with the right people.

So the "miracle door" God opened up that weekend was me suddenly being hired by a company I previously knew nothing about, that I am now crazy about.

Later on that weekend Marsha prophesied over me a powerful word that coincided with this, and she knew nothing about what transpired. Miraculous. God is so amazing. Just wanted to connect all the dots on this one for you who read here daily and might wonder what in the world I'm talking about sometimes! When I tell you something's going on behind the scenes...believe it!

Anonymous said…
I TOTALLY believe you...and I wouldn't even have to be with you. You know our story. God has a fantastic way of working in our lives if we just allow Him to do His Thing! WooHoo!!!

Thanks for sharing! and PTL!
Your sistah up north,
Ruth, PA
8:58 AM

LAURIE said…
God is ALWAYS on time. It is great that you have shared this testimony - it will encourage someone who may be needing a miracle in their life. -God bless.
10:36 AM

Sharon said…
AWESOME! And very encouraging for me...