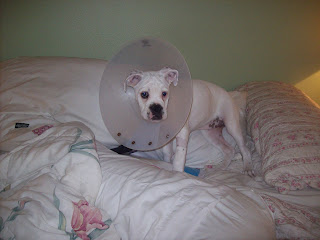 Maddie yesterday walking around on our bed. She is starting to be more like her old self although she's wearing this contraption on her head.

She's doing much better today, in fact she's getting into EVERYTHING again! The frustrating thing is, she has this stupid thing on her head and she's like a bull in a china shop (ha ha!) running through the house and knocking things over with it. We are really trying hard to train Maddie right and make her not only housebroken but a well behaved dog. It's taking an enormous amount of time, and I still think we might put her in Petsmart's obedience classes. Today I was trying to get my Zune earphones away from her as she picked them up and was chewing on them and she flung around because she was upset about me taking them from her, and knocked an iced tea over that was on the end table. She's back to her sometimes ornery self and I am ready for a break. I have been working on a zillion projects at one time which has not been easy. Larry has a board meeting tonight and I'm doing a bunch of stuff while trying to keep her under control. I hate to just put her in the kennel. I don't like to keep her in there unless she is sleeping. We will have some sense of normalcy again soon I'm sure. Larry held her while I took this picture of her below. She was even giving me an attitude about taking her photo so he just held her up and said, "you're getting your picture taken." I swear sometimes a dog can really be like a stubborn toddler. 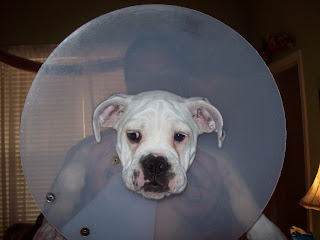 DaNella Auten said…
Yep I was thinking she was sounding toddlerish there.lol
11:21 PM

those things are fabulous especially if you do not like your ankles or calves - dogs love running into them with them and if you think a dog is funny with it on- try seeing a cat- get your cameras out cause it is hysterical-
She will not need it for long-
if you all are with her- even not holding her you can take it off- just keep an eye on her so she is not after her sutures
Love ya
M
5:53 AM

Melissa said…
Ok Michele that was terrible of you! She looks so sad about having the picture taken. Quite funny. Projects...hmmmm...thank you for help us!!! LOVE YOU!
2:16 AM