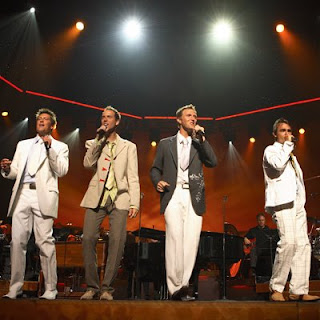 Sharon J. and Michele guessed correctly where it was that my Mother-in-love (Hereafter referred to as MIL) and I were headed for our outing! It's after 1 am but right now I'm blogging about it because I'm too keyed up to go to sleep.

We are getting back from the Gaither Homecoming in Orlando. This year they didn't come to Tampa. The closest concert to us this year is Orlando and somebody blessed me with two tickets! This year instead of Jordan and I going it was my MIL and he's a little peeved at me for that, but he'll get over it and we'll go again next year. (GRIN) I am NOT going to tell him that the Gaither Vocal Band sang, "Let Freedom Ring" or the boy just might go postal on me. He just may be the only 17 year old boy in America who would do that... (lol) By the way, Bill Gaither announced tonight that the new GBV DVD's have topped the billboard charts for two consecutive weeks in a row now. I am not surprised!

Man o Man..........this was like THE BEST homecoming EV-ER!! And we had such good seats, it was INSANE. I sat between two homecoming virgins. Neither my MIL nor the other lady next to me had ever been to one. To say the night was interesting is putting it mildly. My MIL knows all the artists and is a huge fan of all of them like I am. She had just never gone to the actual concert before, but she has seen all of them on DVD's. She was in pure heaven just actually being there. It was so awesome to see her so blessed by the evening.

The lady next to me on the other side came only to see Michael English who she is a huge fan of. She was a serious groupie and even had a picture of Michael on her cell phone screen saver. Not that he's not great, but she didn't know even one other artist there. Not one. And she drove me a little crazy with her comments. First she talked incessantly when I was desperately trying to pay attention. Then, she asked me how long we were going to be there. She looked at her watch at 7:30 pm and said, "wow, we've already been here an hour and a half...is it almost over?" I said, "what? are you kidding? Buckle up. You are at a Southern Gospel concert and there are at least 3 hours left." She looked at me like I lost my mind. (I was right - concert started on the button at 6 pm and ended right at 10:30 pm which is very typical.) And if you are a true fan, you could stand a few more hours of it beyond that and are sad to see it end.

Midway through the concert she leans over and says, "That kid up there is really good...he's got a great voice and I think he might really go far or really be something someday." I wanted to spit my coffee out it was so laughable. I said, "um, considering he's won several Grammys and is one of the most successful Gospel solo artists EVER in addition to singing in that quartet, um, I would say he's really made something of himself already." She says, "are you serious? What's his name?"

(Holding back from rolling my eyes while she talks) "No, PHELPS. P-H-E-L-P-S.

Who's that old guy up there?"

"No, Speer as in singular Spear as you would kill someone with..." (Why did I use that choice of words at the moment? Hmmmmm...)

And then I proceed to explain that he's from the famous Spear family and has only written some of the greatest hit songs ever, is in the Gospel Music Hall of Fame, and wrote many songs she undoubtedly knows (or maybe then again not...?) such as "Sheltered in the Arms of God"...yada yada yada. Again she was wide eyed like this was the most shocking revelation ever. Every two seconds I turned around she was making some wacky comment about these icons of gospel music as if anyday somebody was going to finally discover these "amazingly talented people" and finally make something out of them. Finally she says, "So I guess you're saying all of this is sort of historic when it comes to Gospel music..." "Um, yeah lady, I guess you could say that." Some time later my MIL and I decided to run off to grab a Starbucks and let her crawl back under the rock she must have crawled out from under so we could grab our coffee and go over to the Ernie Haase & Signature Sound table to look at their new sweatshirts which are way cool but I decided not to get one since I'd only get about a month's wear out of it living here in Florida.

On the other hand, sitting with my MIL and seeing her reactions to everything tonight was awesome! She had the time of her life! She laughed, she cried, she was in heaven! They are currently having a Gaither Vocal Band Reunion and a bunch of the people were back together again for the first time ever tonight including Mark Lowry, Michael English and...David Phelps! OH MY. Indescribable. My other all time fav was there -- the Hoppers, finally back to the Homecoming again and doing "Shoutin' Time in Heaven" and...let me tell you, I could listen to Kim Hopper for eternity without ever getting tired of her. The lady is nothing short of amazing. There was also a new group there, well...new to the Gaither homecoming...and they are the Collingsworths. I was totally impressed. Can't wait to hear more from them.

Perfect night was topped off by coming home and seeing a dozen roses and a teddy bear on the dining room table from Larry.

Michelle said…
Hi Deanna,
I am WITH you! The GVB is AWESOME! My husband, sister, brother, and my best friend and her husband went to see them in December. Guy Penrod was on 'leave' and Jason Crabb filled in. At first I was a little disapointed, but wow, can that man sing! I love his voice! Signature Sound was there as well. Actually, Mark Lowry was even there. I LOVE Mark Lowry!

As you said, the concerts are at LEAST 4 hours long, and NEVER a disappointment. A few weeks later, the GVB announced that Guy Penrod had left the GVB and has gone out on his own. Marshall Hall has also left and gone on to other avenues.
The NEW GVB is now a five man group and consists of Bill Gaither, Wes Hampton, Michael English, David Phelps and Mark Lowry! We didn't know that when we went in December.

If someone who attends a GVB concert doesn't 'feel' something by the time they leave, something is just not right!

Here's a link to what the GVB said about the concert you saw last night.

Did you know that Russ Taff's wife Tori has a blog? She wrote a wonderful post about Russ for Valentine's day. Here's here blog address:

Many blessings to you, and have a wonderful, wonderful day!
Michelle
9:10 AM

Melissa said…
I thought that's where you were heading. Sounds like you had a good time. Hope you all had a blessed week. Isn't next Sunday your big day? Praying for you!
4:17 PM

DaNella Auten said…
I should have posted a comment, as soon as I read it, I thought... "um huh, there must be a Gaither Homcoming coming within a coupel of hundred miles..."
lol
8:08 PM

Anonymous said…
oh my gosh! How annoying people can be! Glad you had a good time anyway! Didn't know you like the Gaither Homecomings. I always watch them on TV when there on.
9:40 PM