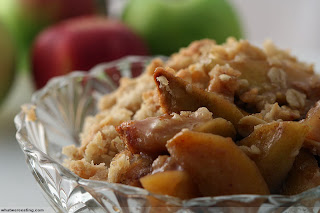 So tonight I wanted to eat some fruit (always have problem getting enough fruit in my diet ~ I'd rather have veggies) and also incorporate some of my new best friend ~ cinnamon ~ into my menu for today. So, I decided to make apple crisp, especially since it's very cold by Florida standards. In fact, I heard a report today which I can hardly believe but they actually said SNOW (a light dusting) is possible here tonight. I'm still thinkin' that's quite improbable, but...we'll see. Anyway, it's cold and we are lighting our fireplace and eating apple crisp in the Shrodes house.

I decided I would share the recipe. It's 5 weight watcher points by the way. I used my "5" bonus points for the day on it but will probably try to do a walk off the pounds video before bedtime if I have time.

In 2 quart baking dish put apples on bottom. In small bowl combine sugar, flour and cinnamon. Add to fruit and toss. Topping: Combine oats, sugar and cinnamon. With 2 knives cut in butter until crumbly. Sprinkle over fruit. Bake at 350 degrees for 55 minutes. Serves 8

Anonymous said…
Three days left of our Daniel fast, and then I am TOTALLY making this!!!!!
9:36 AM