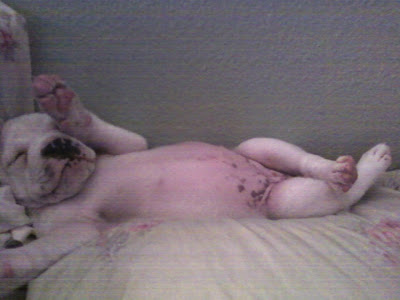 Photo I took of Madeline yesterday as
she was taking a snooze on our bed.
Isn't she adorable?
Today was a good day off. I needed it. I know I always say that about every Friday that comes but the truth of the matter is each and every week without fail I really need it.

Today I woke Jordan up for school and went back to bed. About half an hour later Madeline woke up to go out and was hungry and Larry got up and took care of her and then got Savanna up for school. I slept til' 10:30. Heaven. That's what that is.

I got up and went to get a fill and then got home right in time to help Larry take Madeline to the vet for her initial shots. The vet ended up deciding to do just one shot and one medication to prevent worms by mouth since she is still too young for all of her initial shots. She's just going to be seven weeks old starting tomorrow. I was amazed at how she acted at the vet. She laid there totally still while getting her shot and didn't even yelp or flinch or anything. I forgot to bring a blanket for her to carry her in and she was acting kind of cold so I took my sweatshirt off that I had on since I had a t-shirt under it. She immediately went to sleep and has been very lethargic the rest of the night. We got her a little pink t-shirt that she has been wearing all day. It says, "I'm the princess...you pick up the poop!" (SMILE)

Tonight we came home and Larry said, "what do you want for supper?" I said, "anything I don't have to go in the kitchen and fix." :-) I took a nap while he ordered pizza. It was good and afterwards for indulging in it I went out and rode my bike 1/2 mile however couldn't make it further than that. I was too cold. I decided to do one of my walking videos before bed if I'm up to it. I say that because I'm still not feeling well. I do have something to report on that though...I have a doctor's appointment on Wednesday. I am asking all my friends to pray for me. I would really love it if things are resolved before then. I would love to stop sleeping with my heating pad every night. It's been two months now that I have been doing that.

In the midst of not feeling well I am trying more than ever to eat right and get as much exercise as I can handle. I am talking about walking or biking - not serious cardio or anything like that.

I'm french braiding Savanna's hair for her in a moment. Then we are lighting a fire in the fireplace and sitting outside after we watch a movie that Larry taped for me. I am trying hard not to pick my work up out of my briefcase. So many things needing attention but I need to rest and be with the fam.

Michele said…
Can you say spoiled Madeline :)
I am glad you got to sleep in and enjoying your day
Praying for you
8:53 PM

Melissa said…
I'm praying too! Your little princess and the shirt is just too much! ; ) I love it! She looks like a little keeper to me! Glad to see Larry is taking care of her and you by letting you sleep! Hmmm, spending time with the family is always so important! I too did that tonight. Enjoyed a Daughter Mommy date. Well it was to the store for movies and snacks but we sang silly songs and laughed...my baby girl is turning 5 soon! (sigh)
1:16 AM