These wonderful things are the things we remember all through our lives... 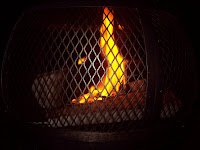 It was a great day with the Northside family today -- one of the days that I'll always treasure. It's over now and I have cleaned up the house once again and have opportunity to sit in the quiet out by the fire and blog about it. A blogger friend, Aaron remarked tonight, "you sure are getting your money's worth out of that fireplace!" (yep! We're loving it.) Here's a photo by the way, as I sit here, so you can get more of the effect of what I'm experiencing minus the actual heat and the crackles. :D

This morning was our Christmas program. I was really looking forward to it, especially the choir's final song -- I knew it was going to be a blockbuster that would turn the place upside down, and it was. We had a new soloist, Epi Ruiz, who was making his debut today and let me tell you the man can sing and he not only sang but he went around the sanctuary and danced and just absolutely rocked the place like nobody's business! It was awesome. We did the reprise not once, but TWICE! Those who missed it really, really missed it.

We had a pretty full house this morning for service and except for one big media snafu which I glossed over as well as could possibly be covered so that nobody but myself and the choir knew there was a huge chunk of music missing, everything went great. No one in the congregation really knows, so I just have to pretty much let it be a L.I.G. (let it go) and move on. Like I said, aside from that the morning was perfecto, could not have been better.

After service we went with anyone in the choir who wanted to go to ABC pizza for lunch. We had quite a number who could not go but about 34-40 people still went. We had a great time just talking and laughing and eating our lunch. Afterwards we came home and I took a much needed nap. We were having a youth party at our home tonight however I have been having some issues health wise since getting back from Africa, and needed to rest while the fam did most of the cleaning. I got up and helped clean about an hour before the party and we had all the youth and their families over tonight. So much for sticking strictly to my WW program tonight. :-) (And I was doing so good...) We had an amazing amount of food here tonight again as well as people E-V-E-R-Y-W-H-E-R-E! At any given time about 10 people were in the jacuzzi, lots of people gather 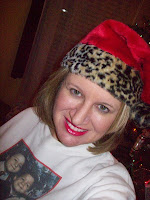 ed around the fire, around the game on the TV, around both kitchen and dining room tables, in the kids rooms, everywhere! It was a great night of fun, food and fellowship! Sue was here with her boys and she gave me an absolutely delightful gift. A santa hat with animal print around the edge (totally my style if you know anything about me!), and an adorable little monkey Christmas ornament (love monkeys too), and a Starbucks mug. Gosh, does th 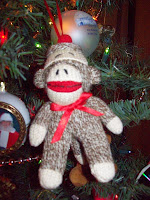 e woman know me well or WHAT? I was so blessed by this as well as a gift bag from Susan today that had another beautiful watch and some perfume from Victoria's Secret as well as a few other things. I am so thankful for these blessings, most of all the wonderful people in my life.

I briefly mentioned not feeling well, above. It's nothing serious but I would appreciate the prayers of anyone reading. It's been 30 days since I've returned home and I still have the same issue I had since the ride home. I have had chronic (I'm talking 24/7 pretty much) pain in my back, midway down, and sometimes the pain will move to the front as well but mostly just in the back. I have taken a lot of OTC medication the past 30 days, pretty much every day, and put my little rice pack that you heat up on when I've gone to sleep and now for the past two nights slept with a heating pad on it, which has brought some relief while sleeping, but when I wake up and get away from the heat, it still hurts. I have not resorted to going around smelling like Ben Gay all the time but it may come to that if God doesn't hurry and take care of it . I hesitate to blame any of this on my trip however I did not feel this way until right after the plane ride home. It could have something to do with being cramped up and on a trip for 30 hours however I can't imagine I wouldn't be over it in 30 days and it would still affect my sleeping and such. Thanks for your prayers as I come to mind. I am just believing the Lord that it will dissipate and be gone. I also hesitate to go to the doctors for this at all because I have always heard that pretty much when you have back pain there is nothing they can do for it.

Only a few more days til' Christmas. We're not quite ready yet but we will be, hopefully Tuesday...at least that's my prayer. What a busy time of the year this is and most of all I'm just trying to enjoy people. In addition to this season being all about Jesus' birth, it also really needs to be about loving those around us. I have a lot to be thankful for.