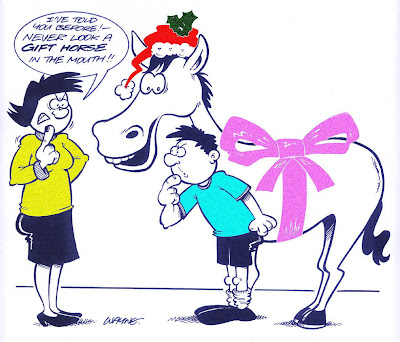 Okey dokey folks, let me set the tone here...I'm sitting out here on the back patio on my swing, alongside my poinsettias that I planted, next to the warm glow of the fire in our new fireplace. We are really enjoying this new blessing and I'm commiting to myself that I will sit out here and relax at least a little bit each night.

Last night we were sitting out here with our church leaders around the fire and talking and Bernie started asking interesting questions of everyone -- nostalgic type stuff, and things about memories. One question he asked was, "did you ever get a gift you did not want to receive?" I instantly said, "no" because quite frankly I couldn't remember a present I didn't want to get. But upon further reflection I did realize I have received some. I thought I'd share about them here, and find out...perhaps some of you have also had the same kind of thing happen from time to time.

Have you ever had someone give you a gift that had an ulterior motive behind it that really kind of hurt? For instance, a friend of mine had a Christmas gift one year that devastated her. She had not asked for any type of exercise equipment or such and her husband bought her the video, "Buns of Steel". She basically sat by the Christmas tree and cried, pretty upset that he obviously thought she needed a lot of improvement. Sad. I am grateful that my husband has never gotten me anything to do with exercise or such unless I asked him to, which I have several times. I know I need some work on various body parts like most women but thankfully he never points it out to me. I don't think any husband with his head on straight would.

In retrospect I realize Larry and I have gotten some gifts we didn't want. There was a lady in one of the churches we pastored and she was famous for giving gifts to "make a point" when she knew you disagreed with her on something. For instance if she thought a person's kids were unruly she'd give something like Dr. Dobson's "Dare to Discipline" and write something inside like:

Thought this book would be a real blessing to you...
Praying for you...

Realize, I think Dobson's book is awesome, however the point is that this particularly lady wasn't giving the book in love, she was doing it to slam someone and basically say they were a bad parent. Such things don't cause people to change, it just makes them mad. One time she thought I was allowing "sin in the camp" on the worship team (a long story unto itself, but suffice it to say it wasn't true) and soon thereafter I received a book about holiness complete with one of her famous inscriptions that let me know in no uncertain terms how much she was praying for me. I always let her know I appreciated her prayers...I mean, hey...I could always use more prayer, so lay it on. But I must say, I didn't always read her books nor receive them with much joy because of the spirit they were given in. Her gifts were not really given in love but were more like a slap in the face. One thing that made me glad when we were no longer pastoring that church was that I wouldn't have to receive her boomerang books anymore, designed to come back around and whack me emotionally.) But I was mistaken because would you believe after we came to our new church she actually put a book in the mail to me? Yup. Honestly. It was basically a, "oh yeah, and here's one more thing I forgot to tell you in a not-so-subtle-way that really bugs me about you..." Sheesh!

In the earlier years of my ministry I also had someone who gave me a few books about a woman's place only being in the home, and paying strict attention to the "seasons of life" when they thought I was "out of order" for working in the church office. Suffice it to say those books were relegated to the same stack.

The good news is, if you get a gift you don't want you can always return it or re-gift it although I must admit I have never re-gifted most of the books I've been given such as these because in most cases, I didn't want to propogate the message they were giving and besides, they had those pesky inscriptions from Sis. Scuttlebutt on them anyway! lol

How about you? Have you received any gifts you didn't really want or were given as sort of a

message in disguise instead of a gift of real blessing and love?

Candy Rivera said…
That was so funnny!!!! Talk crazy stories.You know what irks me is that when people know you are a christian they think everything they give you has to have a big Jesus on it. For Christmas two years ago my mom gave me two humongous ceramic spoon and fork set non the less to be hung up in my kitchen wall, they where about 2 1/2 to 3 feet long one had Jesus praying before they took him away and I think the other had Mary Jesus and the apostles. Both had prayers written bold print in gold.You should of seen eddies face(>; Still have it in the storage out back there is no one I could re gift that to or would I want to. Maybe one year as a prank I'll pass it on.Your lady tops!!!!
10:14 PM

Tara Sloan said…
I once got a beta fish w/ the plant. A beta fish???? And my kids were devastated when it lived only three days! We had to have a funeral service around the commode!
12:58 AM

Melissa said…
I have been iven many books. The ones that hurt were the parentin books that we received after we had our special little guy who was a VERY wild 2 yr old...now we understand but back then those books really did an emotional slapping. Oh you'll love this..once for an Easter present my college roomies gave me two ducklings as a present! Just so you know ducks even when young are messy...very messy and they never shut up! Had to put them in the bathroom like a puppy cause they made so much noise at night unless you were holding them! Loved my roomies but not the ducks!
1:55 AM

Dr. Deanna DossShrodes said…
I for one absolutely distain the idea of pets as gifts...I think it's a very thoughtless thing to give someone a pet to take care of if they are unaware of it and have not approved the idea.

One day last year the boys played a joke on me by grabbing a stray dog a few minutes before my car pulled in the driveway after work and they claimed this was a new gift someone had given them. I bursted out crying until they calmed me down and said, "chill Mom, it's a joke..."

I just can't take another responsibility...that's the truth of the matter. I feel overwhelmed as it is most days.
2:23 PM