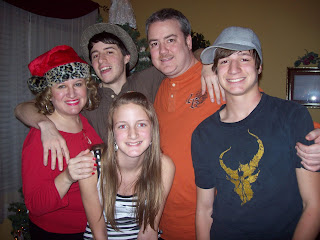 Today Christmas started out in our home like it always does...by sleeping in! Yep, we are all night owls, and sleepers. Now that I have a middle schooler, high schooler and college kid, well...sleep is easy to come by for the parents in our house. No more "crack of dawn" stuff on Christmas morning. We all got up at about 10:30 am. Before we opened our presents we sat down at the table in the kitchen and had my famous breakfast sweet rolls. I made extra for the boys since it was Christmas day.

We went in to open presents and took our time as we always do. The highlight was Savanna's phone gift. She ha 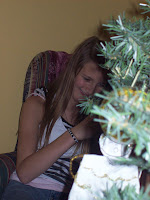 s been wanting a cell for the longest time and we have said no, but this was her big day. Larry put the gift (we had put it in a big box under the tree) on her lap but said, "hold on a minute...don't open it. Grandma and Grandpa wanted to be on the phone when you open this to hear your reaction." She said, "really? Is is THAT good?" He said, "yep!" and he called her phone number for the phone that was in the box. Her Christmas present started ringing and she started screaming with excitement and said, "NO WAY!!! ARE YOU SERIOUS??!" She was beside herself with glee. That was the gift that just made my day. Truth be told, I'm feeling much better now that she has a cell. I want her to be able to get ahold of me anytime even during school should she have to. (I know they aren't supposed to use them at school but I am speaking of in an emergency situation.) Parents just feel safer nowadays to know that our kids have a line to us anytime.

My gift that I'm very excited about is a Zune. I am so thrilled about this and it will assist me greatly in getting some more exercise to my fav tunes. I already went out and walked a mile with it today I was so excited! I downloaded about 10 of my favorite worship CD's on Zune (I did a 14 day trial thing to download as much music as I want) and I have ever single Sara Groves CD on my Zune right now was well as Rita Springer's latest and a few others. I am all set for at least a few days. :-)

Dinner turned out well except for two dishes. I couldn't believe it. Not saying this to brag or anything but just as a fact I'm a good cook. I rarely have something flop especially our usual dishes. But we had two mishaps today. I don't know why but the sweet potatoes never turned out and I had to throw them away. Seriously! I know this sounds bizarre but we peeled and chopped them and I boiled them to mash them for our casserole that I usually make. Not only were they very hard to cook (didn't turn real soft) but they did not taste sweet and almost had a bitter taste. I teste 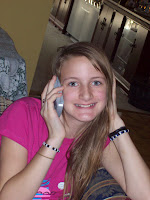 d one and said,"yeccck! what in the world is wrong with these?" and ended up throwing them out. No sweet potato casserole for us this year. We must have gotten a bad batch of potatoes as weird as that sounds. Then there was the matter of the creamed corn... 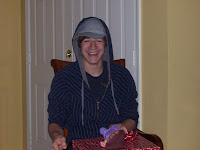 d, put it on the table like it was the norm. Dustin was the first to taste it. He said, "oh my gosh, what in the world is in this?" Then he smacks his lips and second and says, "this tastes like vanilla. What's wrong with it, Mom?" I said, "vanilla? Are you serious?" "Yeah, I'm serious..." he replied.

I said, "don't say anything til everyone else tastes it." But he kept going on...

Casey took a bite and said, "I think it's fine. Dustin, don't complain about it." And he said 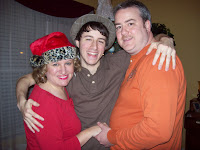 
Larry tasted it and said, "hon, it's too sweet. Something's wrong..." and then Jordan and Savanna tried it and didn't say much but didn't look like they were enjoying it. So I fessed up that it was made with french vanilla creamer. I thought Jordan was going to hit the roof. "MOM! WHAT WERE YOU THINKING?" To which Larry says, "this is all my fault, isn't it?? Did I pick up the wrong items at the store?" and I said, "well, I just didn't have regular cream, that's all..." to which someone shoots back to Jordan and Dustin, "stop it guys...she did the best with what she had! Don't complain..." but in the end everyone including myself had a tremendous laugh over it and what a memory it now is! When the meal was over Dustin said, "thanks mom for the meal, it was great...especially the yeast rolls..." The rest turned out well as always, it was just that darn creamed corn and the weird potatoes I had to throw away. Aside from that the 7 layer salad, cherry glazed ham, hash browned casserole, broccoli with cheese, yeast rolls, pumpkin pie...was all delectable!


We took some pictures before we shared pie, games and conversation. A good day and night was had by all. These wonderful things are the things we remember all through our lives...


But my best Christmas memory this year was actually last night. I had finished getting all the things in the kitchen set up for cooking this morning and vacuumed and got ready to tur 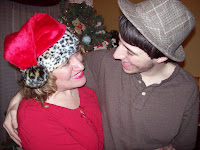 n all the lights out and go to sleep. I popped my head into Dustin's room to say good night. He was almost asleep. He said, "wanna lay down next to me, Mom?" So I came over and snuggled for a little bit. It had just turned a little past midnight when I laid down and I said, "merry Christmas baby..." and gave him a kiss on the head as he was falling asleep, and he said, "Merry Christmas Momma...I love you " as he drifted off to sleep. And with a tear running down my cheek I said, "I love you too beep beep..." and tucked him in and went to my room.

Melissa said…
Merry Christmas my dear friend! Sounds like you had a good day! We did the untraditional dinner, Sean wanted Mexican so we went that route but had the yummy desserts. Which btw the pie crust is fab! I did well. Just wish I had taken a picture of my first ever cherry pie. All well next year...its all gone now! Love you!
2:44 AM