My husband is crazy 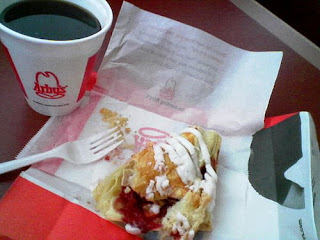 Larry did the funniest thing last night. After the soccer game he took Jordan to Arby's. Everyone in my family knows I don't like Arby's -- except for their cherry turnovers I don't like anything else there, at all. (And yes, I've tried LOTS of things on the menu.) I had no idea Larry and Jordan were even stopping there, in fact I was home in bed asleep at the time, but here's what happened...

Larry ordered his and Jordan's food and then asked for 2 cherry turnovers, to bring home to me. "Sorry sir, we are all out of cherry turnovers..." said the woman who was working the counter. My husband got a horrified look on his face and said, "you're kidding..." and looking very upset he said, "I don't know what I'm going to do. If I go home without them, my wife will beat me..."

He never cracked a smile saying all this, so the woman took him very seriously and said, "sir we won't have them until morning." And he said, "well, could you write my wife a note saying that you were out of them, so she will know it's not my fault?" And the lady said, "I'll do one better than that. I will get a letter from the manager to take home to your wife saying that we don't have them right now and if you come back first thing in the morning we will give you two of them to take home to her for free."

My husband couldn't believe she was saying this. He had just been teasing of course but they took him TOTALLY serious. It was too funny but amazed that they took his little quip about me beating him seriously. So a few minutes later the lady comes out with a letter signed by the manager that they were out of turnovers but would have them in the morning and he could pick them up then to bring to me.

This morning he got up and went and picked them up and brought them home to me and told me the story and gave me the letter from the manager . The kids and I have absolutely been cracking up about it.

My friends, if you are hungry and go by an Arby's and don't have any money on you just tell them your spouse might beat you and they will give you the food. This might be especially helpful information as our economy gets worse. Ha ha!

I think that's pretty cool that the Arby's people did that for him and might just be enticed to go back in there and try something else on the menu since they were so unbelievably accomodating of my husband. However, if I ever go in there with him, they will think I'm a husband beater. I do looooooovvvee cherry turnovers but I would never beat anybody over it...but, for something chocolate...

Family Food Larry (Teeb) and me

Melissa said…
Now that is one great husband you have! Too funny! Hope you enjoyd your ymmy turnovers and I agree their turnoves are great!

Anonymous said…
Hilarious!!! Eddy loves those turnovers too, he may try that!
11:44 AM