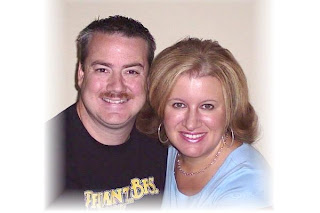 Hey friends, I have a few extra days in advance to tell you this time, that Larry and I are getting ready to co-host America's Prayer meeting once again. This time it will be this coming Tuesday night at midnight (or early Wednesday morning should I say -- we start at midnight and to to 3 am on Wednesday morning, EST.)

Usually Larry guest hosts by himself. But a few weeks ago he invited me to co-host with him, with the blessing of the general manager at the station. Well...the next day after we did the show, the GM called Larry and said, "I just need to let you know the feedback we got at the station was incredible!" He said they got many phone calls and emails just raving over the fact that a husband-wife team co-hosted!! People just loved it. (Just another illustration for me to use in my teachings that partnership ministry is "where it's at!") So yesterday the GM called Larry to let him know they needed a guest host again and he said, "Brother, I love you and we love it when you host the show by yourself, but after what happened last time we really want you to bring your wife with you again!" So, we're doing it! We had a blast last time, because it's what we do best and we enjoy it so much. The GM told Larry that they were "amazed at how we flow together." Well, we've had 21 years of wonderful practice.

If you want to tune in and you live in Tampa, it's probably channel 3 if you have Direct TV, or on local TV on channel 3 or 22. And, as I've said before, the show is now worldwide show, on SkyAngel and also for anyone who has Direct TV. If all else fails, just get on your computer HERE and watch it. Anyone, anywhere can watch it if you have a computer and internet. Simply scroll all the way down and look to the right where it says, "Live Webcast". Click there and you can watch from your computer. You can also call in if you want! There's a toll free number. I will warn you, tons of calls come in from everywhere so it's not guaranteed that they take your call as one that goes on the air, however everyone does get prayed for by ministers who are also there answering phone calls.

The show airs live EST from 12 midnight - 3 am. So for those of you on the west coast that would be 9 pm-midnight.

Last time my key word to let you blog friends know I was thinking of you was "covenant." I s

aid it three times during the broadcast. This time my key word to say, "I love you bloggers" will be......"BLESSING". Get ready for a BLESSING as you tune in to pray with me and the Teeb. :-)

Larry (Teeb) and me

Pastor Shelisa Hull said…
I love the rave reviews you and your hubby received after ministering together! That is the way it should be! That happens to us all the time too! I think it is funny when they say things like, Brother we love when you host by yourself....but! :o)

Melissa said…
I will be watching and praying with you again! I love the husband wife team! Just like God ordained!
9:51 PM

Aaron said…
Okay, I can't stand it anymore...what does Teeb mean? I figured I'd find out sooner or later but I need to know NOW:-)
What do ya know? Do what God created you guys for and people respond. God math!!! Or science???
2:58 PM

Deanna Doss Shrodes said…
Aaron,
I'm laughing my head off right now reading your comment. You made my day.

Ok, I thought I answered this a while back when a reader asked me and I commented but maybe you didn't read it or it was years ago, I dunno.

I think you are going to be disappointed at this anti-climatic answer, but here we go...

I have nicknames for 95% of the people in my life...ones I come up with. I have heard it said that the more nicknames a person has the more they are loved. My people must be really loved. I have nicknames for Larry, the kids, people in the church, my friends. They are names I make up, not things peopel already call them. Okay, don't ask me why, I have no idea but I call Larry (my husband) Teeber, as an endearing term and it means nothing I have always called him that, and then I shorten it to "Teeb" a lot of times. My three kids are all called "Beeber Teeber" at various times. Other names for them:

My son Jordan: Peach, Peachy (because his head was like a fuzzy peach for so long when he was little); Sprindle Ka-dingy-dong. (No idea why, we just started calling him that) Angel (most people when he was little thought he was a demon but I was naming it and claiming it - thus the name "Angel" or sometimes shortened to be "Ang" (rhymes with strange)

Dustin: Chocki (short for chocolate - have called him that since he was about a year old - because he's got the most chocolate colored eyes you've ever seen.) Other names: Chocki Woki Souvlaki. (I'm 50% Greek, my kids are also therefore Greek, therefore the Souvlaki comes into the name there...) Other names: Dustin Bustin, Dustin the Wind, Beep Beep.

There are other names but these are just off the top of my head. They are always said as an endearing term, none of them are put downs.

My family doesn't call me anything unique, just either...

Deanna, Momma, Babe, Honey, Darling. That's about it for me.

And that's the meaning of Teeby or Teeb. Sorry it's not more exotic like the fact that we met on a yacht named Teeber or something...it's just.....my own strange way of naming my family.