Candidates kids should be off limits!!! 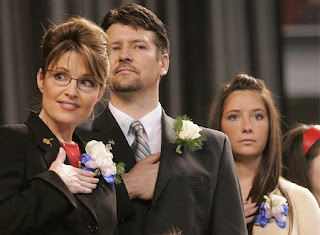 Should Palin's daughter's pregnancy change anything in the political landscape? No, no, no, a thousand times no. What's the news story here? The kid made a mistake, plain and simple. All our kids make mistakes, just some not so public and visible. Bristol Palin is not the candidate, her mother is.

I'm pretty sensitive to this because although on a much smaller (actually miniscule in comparison) scale, I've gone through it in the ministry. All pastors with kids have. Many times our children are singled out because of our position, when in reality it's not them that received or accepted the call to the ministry or the pastorate, it's us. While we in leadership are scrutinized and even criticized to a higher degree (and we learn to expect that as it comes with the territory) our kids shouldn't have to deal with it. Yet many expect more out of pastor's kids than other children. Everything they do is magnified, and truly, that is not right. I know my sisters in ministry who are reading this understand and know how important it is to protect our kids from this type of undue pressure. Should Bristol Palin have to face the consequences of her decision to have sex out of wedlock? Yes, and she is. However my point is, let her face those ramifications outside of the media spotlight. Leave the poor girl alone.

Regarding her mother, I've already read blogs that say, "Isn't this hypocritical? Doesn't Palin preach abstinence?" Yes, and I'm sure she still does. But although we raise our kids with the right values, sometimes they still make mistakes. They have this thing called free will, as much as it bothers me sometimes. (SMILE)

If anything I think this further solidifies that Palin lives what she preaches. She is strongly pro-life. Now not only has she gone through with having a Down's Syndrome child after having been told this while pregnant and give the option of abortion, but she, along with her husband, is also now helping her daughter navigate the difficult waters of a pregnancy out of wedlock. She's having to live "pro-life" when faced with the very real ramifications of it. She didn't sneak off with her daughter to get an abortion and "make this problem go away". Believe me, I unfortunately know for a fact that there are some Christians and even church leaders that have done that with their children when faced with this situation. Even with a high profile position, Palin did not fall into the trap of doing that. She did the Godly thing and is facing this issue head on. What's the scandal here? She's doing what any right thinking Christian would do.

Yes her daughter has made a mistake, a sin in fact. However, as parents we can impart to our children the truth of God's Word as best we can and then hope they follow it. When they do not there are consequences but it is not necessarily reflective of the way we have raised them.

Barack Obama made it clear early on in the process that his girls were off limits and aside from the DNC, they have been out of the spotlight. For the record, he's also said in a news conference today that he believes Bristol Palin should be off limits to the media. It's very admirable that he is not taking any shots at all at Palin over this and is handling it with the utmost of grace and integrity. I hope all Americans will take Obama's lead on this.

I'm impressed with how he's handled it. Kudos to Obama and to Palin.

LAURIE said…
When I sin ... I am grateful to God that He does not blast it from the rooftops ..."HEY - EVERYBODY - LOOK AT WHAT THIS CHILD OF MINE HAS DONE!!" Instead He allows room for me to repent and to grow in Him. When I sin, and do what I know I am not suppose to do .... Is it God's fault?

So why do we judge and find fault with parents such as the good Governor? or your Preacher?

Just had to TOOT MY HORN!

Angie said…
Amen! I seriously hope that our Christian sisters and brothers realize that this is life lived out...Palin is as down to earth as we can get with politics...there may never be another person heading to the White House like her.
8:13 PM

Wow...this is shaping up to be quite an election. Suddenly I'm interested again :o).
8:13 PM

Tara Sloan said…
KUDOS Deanna! I am in COMPLETE agreement with you! Leave the kid alone!

Tara Sloan said…
Gotta say one more thing... if I was Sarah Palin and someone actually had the GALL to say anything about my child and personal family issues, I do believe you would find me taking off my earrings and high heeled shoes saying, "Okay, NOW it is on... nobody messes with MY family!" You know, the whole Sweet Home Alabama" thing Melanie did when Candace Bergan's character told her mama to, "Go back to your doublewide and fry something..." And Melanie (Reese Whiterspoon) knocked her out and said, "Nobody talks to my mama like that!"

Pastor Shelisa Hull said…
AMEN - Can't be said enough about this post!! As a PK and raising teenage PK's in my home right now I can relate to everything you said!! I feel for this young girl that at a time when their family should be celebrating such a career high for thier mother, she is having to feel the pressure and pain of being a cause for public scrutiny!! As a PK who messed up more than once I carried a lot of pain and guilt about being a source of scrutiny for my father! Thank God that my parents loved me through it. Stood with me, and believed in me anyway!! Today my daddy tells me all the time that he is proud of the woman I turned out to be!! He was no more disqualified to Pastor our church then Palin is to be the Vice Presdent!! We need to pray for this young lady and her family!! Thanks for the chance to "vent" with you :o)
Shelisa
12:47 PM

Dr. Deanna DossShrodes said…
Yes, yes, yes ladies...agreed. Tara..."go back to your double wide and fry something..." TOO FUNNY. I forgot all about that line in the movie til you just brought it up and the whole scene (and me picturing you taking off your earrings and shoes and clocking somebody) has me laughing and I really needed that today...as you know. :-)

Love you all, thanks for stopping by and being friends...it means more than you know.
1:50 PM