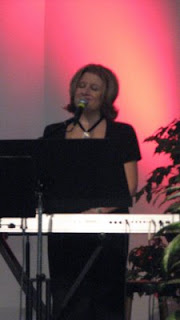 Lately I have just needed to soak in worship.

Ever been there? It's a place spiritually and emotionally when you can't get by on the normal amount of God's presence. Life has become abnormal for some reason, so the level of dependence on Him is also more than normal. Hopefully that abnormality brings you to a different place in your walk where you never want to go back to where you were again.

I've said it before about stuff I've gone through in the past and I'll say it again... I've gone through too much hell in my life to stay at the same level!! I believe if you go through hell you better get a payback for it. The devil is supposed to give you back seven times whatever he stole - so don't ever settle for going through hell for nothing. Ever. Demand the payback! Demand the next level! When I go through something, I just keep saying to the enemy, "thank you, thank you, thanks for my next level! Couldn't have done it withoutcha!"

I've been saturating myself in worship constantly, unless I'm just sitting in silence listening for Him. I was reading a quote by Tommy Tenney the other day where he said, "Some forms of worship only release their sweetest fragrance to God when offered from the fires of trial and adversity." I'm learning that. I'm telling you, I'm at a new place in worship than I've ever been. It's kind of scary to get me at a piano right now, because I don't know how to stop or at least I don't want to. The last thing I want to do is shut off the music whether I'm listening to somebody else or singing it myself. And I don't care if anybody's with me or not. In fact it's most precious when I'm alone. The presence of God is so soothing. Here's how I would describe it in my life right now...

Have you ever burned your finger while cooking? You probably have quite a few times just like I have. When you do that, if you stand there and hold your finger under the faucet with cold water, it's a great relief...for as long as you keep it there. But as soon as you take your finger away from the water, it hurts like crazy. Worship to me right now is like that water. My spirit is the burned finger, and I'm placing myself under the faucet every moment I get. When I get a burned finger in the natural, I get tired of standing in my kitchen at the sink and after a little bit, I give up and let my finger hurt while I go on to something else. However, right now I'm not getting my spirit out from under the faucet!! I don't care if I have to let everything else go. I really don't. I am just at a place where I don't care because I just need the relief that the spirit of God brings. I just need the healing that comes from worship. So I stand there, sit there, lay there and listen...repeatedly. ..and I do mean hundreds of times, and let it wash over me.

I've also been spontaneously singing and writing worship songs in the secret place with God, just singing my prayers to Him. I just wrote a new worship song called, "Compassionate God". I might share it and then again I might save it for just for He and I. :-)

Friends have been so faithful to send me songs and say, "the Lord told me you need to listen to this now..." Some of the songs I knew already, and others like "Part the Waters Lord" and "Bless Your Name" that LaDonna sent me, I had never heard. (Both of the songs I just mentioned are by Selah. Click the links to go listen to them.)

There are many songs that I've continuously played the past few weeks and I'd like to share them with any of you who are going through something. Here's a list of the top ones I'm been soaking in, as well as the two above, with links:

I Have to Believe by Rita Springer (lost count a long time ago at how many times I've played it..hundreds...I also go to her Myspace page and just listen to all four songs repeatedly and soak in them for hours.)

Healer by Planetshakers (doing this one with the church now too...it's become a fav quickly)

For Every Mountain by Karen Wheaton (Tara felt the Lord speak to her to tell me the other day to go back and listen to this one...I did and wow, forgot just how powerful it is. )

Believe by Kirk Franklin (As crazy as I am about Kirk -- yes, I'm a HUGE fan -- somehow this song escaped me until now. I love it. It's going on my Mp3 so I can bike to it.)

Also go to Tara's blog where she dedicated a song to me and some other women friends in ministry who are going through some stuff. The song is, Do It Anyway by Martina McBride. I cried... and said, "yes, Lord, I'll do it anyway." Let me tell you friends, this is a prophetic word from Martina McBride, and I am SERIOUS.

Anonymous said…
Been there, done that!

"The Thirst is Taking Over" by Skillet

Aaron said…
That finger under the water analogy is awesome:-) Still praying by the way.
1:06 PM

Cassandra said…
Awesome recommendations. May I make one? the series by Beth Moore (hosted on Life Today's website) called "Intensive Care" Girl, its where you are I promise.
1:31 PM