Random thoughts from my bed...
where I've been living. 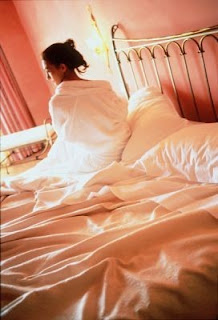 Back with a hodge-podge, mish-mash post with stuff the past few days that is on my mind...

not really related to one another...

but just things I'd like to blog about that are in this head of mine, or happening in my life.

I haven't had the motivation to bike for three weeks, even with my new bike. I know, that's stupid. But it's reality. Aside from work and essential appointments for the kids or myself I've pretty much been in bed. Don't worry, I'm not getting fat. I've lost six pounds in a week even though I've been laying here. Pretty amazing.

If I'm not reading the Word I've been listening to Healer or I Have to Believe. Well last night I thought, "even though I still don't have the urge to bike, I'm going to change up the routine even if it's from bed." I sat up, turned on some soothing classical music and wrote a letter to the McDonalds Corporation, imploring them to bring back cherry pies to all locations in the USA. I'll keep you updated on the progress of this project.

I went to get my teeth cleaned yesterday after work. I'm going every 3 months now instead of six and paying for two extra cleanings a year in hopes that I won't EVER have any more dental work done again. Due to what I went through before, I never want another needle or drill in my mouth again. Lia doesn't work there anymore...another goodbye, but...we still keep in touch aside from the dentist office so I guess it's not completely goodbye. I hate goodbyes in case you never noticed. Why couldn't God have just created hellos? We could just have hellos, and no goodbyes. One day we will exist outside of "time". It's possible. So why can't we exist outside of goodbyes?

Also in yesterday's news, a demon spoke to me. Seriously. I was taking something down to the church kitchen and was by myself. I didn't even bother to turn the lights on because I was just quickly running in and out. I took the item in my hand and placed it on the counter and as soon as I did I heard this guttural voice speaking foul things, and I broke into a cold sweat and froze in my tracks. It was gravely and raspy and so creepy. You know how you just want to run but can't? It was one of those crazy moments. I felt like my feet were glued to the floor. I thought, "this can't be real. I am truly cracking up. I'm not only depressed, I'm going schizophrenic. I'm hearing things." I stood there and took a deep breath and got my bearings and there it came again -- the voice in the dark. It was another voice this time screeching out and saying some really bad stuff and it seemed to come from the kitchen wall.

I have cast out demons before and I know I have power over them and am not afraid of them. However it has never happened to me this way in the dark and unprepared, and minus a human body! (Usually it's happened in church or when I am counseling or something, not in the dark by myself in a building. And the reason I was freaked is because I didn't see a person, I only heard a VOICE! )

I ran up to the office burst in the door and said to Larry and Cathy, "oh my gosh, there is a DEMON in the kitchen...I swear...please do not think I'm crazy...there is seriously a demon and I need you to go down there with me and help me deal with it...it's just a voice...just an awful voice... "

Cathy says, "oh yeah, I know, I heard it yesteday. The same thing happened to me."

My assistant hears a demon in the church and doesn't mention it? Okkkeyyy dokeey folks, that should show you what our staff faces here. We have so much kooky stuff that goes on it doesn't even phase some of our staff anymore! Well actually it did freak her out at first. But then she realized it was a demon coming out of an actual person, and came back up to the office and went about her work. She went outside and saw that it was coming from a woman who was on the other side of the wall. It was someone outside the door who has been hanging out on the church property. On the other side of the kitchen wall this person was there, speaking in these different voices very loudly and it is what I heard in the kitchen.

Cathy went back down with me and Larry soon followed us down. All is well now. The situation has been handled as we always do at Northside...however, just goes to show you the spiritual warfare that we so often go through. It's serious business folks. When you pastor a Pentecostal church and the spirit is moving, you will encounter these things and in increasing measure.

One day not long ago my kids came to me after Sunday morning church and wanted lunch money to go out with the youth. I said, "I don't have any cash on me right now - go ask your Daddy. They said, "we can't Mom - he's casting a demon out in the sanctuary..." I kid you not. My husband is not a demon chaser by any means. But they sometimes seem to chase us! We have had so many of these experiences here.

Larry had a pool party with the youth last night at the Currie's. It was Savanna's first youth activity. She graduated Wednesday night from Mpact girls into the youth ministry. I can hardly believe it. My baby...in the youth group. If I think about for very long it makes me depressed so I have been avoiding thinking about it since the last thing is to be more depressed. Don't get me wrong, she'll experience great ministry in the youth group. Right now the youth group is going FANTASTIC and I have no doubt she will soak it up! It's just that I'm not doing well with change right now, period. For the past few months Savanna has been telling us she feels called to missions and particularly to Europe. If you would have told me that 6 months to a year ago I probably would have jumped for joy, but right now although I reacted favorably to her, (I'd never hurt her by acting outwardly depressed about it) inside I just felt devastated, seeing it as another loss...saying goodbye to her. I can't fathom it right now. I've experienced too much loss and the thought of saying goodbye to the baby puts me over the edge right now so I have blocked it out of my mind for now every time she chatters on about Europe. She came home from camp talking about even more after she was spirit filled. I'm proud of her, so proud. But right now I have to just concentrate on the fact that she's in 6th grade and I have at least seven more years with her living in the same house, laying on the bed with me watching Jon & Kate Plus Eight, sharing shoes (yup, we wear them same size now - 9!), and snuggling.

Nope, nope...can't even think about the babe leaving now. I cling to my family even more than I used to because I realize through it all they are one blessing that remains...they are all saved, spirit filled, and serving God. This is my greatest treasure. A lot of other things have gone wrong, a lot of other things disappointed, but my marriage and family is strong and I've heard many people say, if you have that, really you have it all. I do have it all then...and 1/5 of it is not going to Europe until at least 2015, so I'll put it out of my mind for now.

Bleep. There it goes.

So, what are your thoughts on the election?

Anonymous said…
Oh my word!!!! So often I speak in code on my blog- but this post of yours, speaks volumes... In the midst of my depression, I heard demons laughing!!!! I too, thought I was going crazy... I"m not even kidding!!! If you met me in real life, I'm the most real- down to earth- normal person you will ever meet- but I heard them laughing AND I saw them!!! and I'm not one of those super hyperspiritual people that always scared me in youth group because I just knew they could see my soul!!!! I wish I could sit and have coffee with you and share my story because what I saw- I couldn't sleep for nights! That night, I screamed so loud that I freaked my husband and kids out and probably the neighbors. I ended up calling several of those hyperspiritual prayer warriors for advice and prayer and answers because this had never happened to me before! Anyways, enough of that... What I learned is that I am exactly where God wants me to be, doing exactly what he wants me to be doing and I need to keep stepping out doing what he has planted in my heart to do... I must be doing something very right for the enemy to be attacking from every angle... oh the stories I could share of the past 4 years, Deanna... and quite honestly, it has been several bloggy soul sisters that God brought into my life only recently that have helped me through several storms and have prayed for me... What Satan means for bad- God will turn to light!!! I will stand with you in prayer and you can stand with me! It helps to know that there are others out there like me!!! Some of your events feel so familar...
9:23 PM