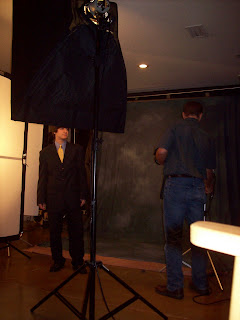 We went today to have Jordan's senior portraits done at Thompson Studios in Tampa. It went fantastic! The way they do it there you see the proofs right after taking the pictures and order everything the same day. So we will have the photos within about four weeks. It's the same place Dustin's photos were done and we have a special photo of both boys that was taken that will soon go up on our wall. It's going to look spectacular!

Jordan was such a natural in front of the camera and he looked so awesome. I feel that way of course as his Momma, but today the owner of the studio said, "I honestly don't say this to many people nor do I make any kickback on this, but this guy is really a natural and honestly better than many of the pros I work with. You need to take his proof's down to such and such agency and see if he can get some work." (He was SERIOUS.) Right there on the spot he gave me a referral to three agencies he works with and said, "you will not have to invest ANY money in classes, or pay these people anything...this is not a scam...it's not "modeling school" nor are they going to ask you for any money. These are real agencies that will be the ones hiring you not the other way around!" Then he pointed to a kid's picture that he referred who is now modeling for Abercrombie and another guy who paid his entire college education on ONE JOB. Seriously. Can you believe that? I have to be honest it was hard for me to believe but he said, "I'm not kidding, I think he's a real natural and you need to at least think about pursuing this, especially since he seems to be a young man with a good head on his shoulders that could handle it..."

Jordan is almost 18, it's not like he would be a child going into this if it worked out. I don't know what will happen as a result but the photographer recommended we make an appointment with all three agencies and take his proofs from today and present to them. He said he was relatively sure Jordan could get "catalog work." Is that amazing or what?

Once we get his photos I will show you some of his "work" today (GRIN) and I think you might be amazed too!

In other news, it was a typical Tuesday for me cramming in as much work as possible as it's my most productive day. I got about four projects for church done and then did our laundry and Bobby's laundry. He dropped it off yesterday in desperation. Larry says, "Deanna, why do you agree to do stuff like that?" Can't help it, these are my "kids" - (not just my natural ones, my spiritual ones too that Jesus has entrusted me with to 'raise up'.) I know, I know, you might think as my husband does, "how will they be raised up if they can't do their own laundry?" (SMILE) Well, the poor boy had school AND work today. When was he going to do it? I just had work and did the laundry in between times. :-)

We're winding down for the night and I'm getting my jammies on and watching the DNC. I'll probably fall asleep watching the speeches...morning comes so early in my house.

Sweet sleep to all...

Tara Sloan said…
Can't wait to see those photos of that handsome guy! I've always thought both your boys (young men!) had great bone structure! I am not surprised!!!

Someone had mentioned the same type thing to us about Kelsea for acting and I have been so hesitant and unsure about it... maybe I'll check into after I find out how it goes with Jordan!
10:26 AM

Unknown said…
Go Jordan. PD, I hope it works out for him if that what he wants to do. You are right, at least he's old enough to decide.
1:32 PM

Anonymous said…
I told you what a handsome young man! (smile) My son wants to know where he found his red jeans.
Do you know? He saw them on him at the PK retreat. I have looked everywhere here! Do you know?
2as1
3:13 AM