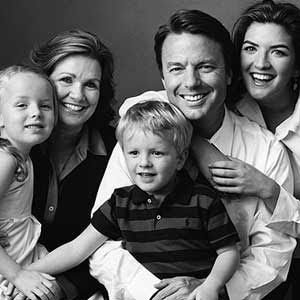 So I'm admitting it here, folks. As I'm eating crow, you'll probably find it amusing. It will also give you some insight into mine and Larry's interesting relationship.

Conversation in our car on the way to work one morning when the presidential campaigning first started:

Deanna: You know Lar, although I don't agree with John Edwards' political views at all, I can't help but love him. In fact, I might even vote for him if he actually makes it to be the nominee!

Larry: (incredulous look) WHAT?! You've got to be kidding me, Deanna! What in the world would possess you to do THAT?"

Deanna: (wistfully) Well, I know, I know, but on a personal level, I'm just crazy about the man. I mean, look at their story...awesome marriage...losing their son in a tragic car accident...making it through that...now facing Elizabeth's cancer...and the way he loves her, and is so faithful and caring...and their recent vow renewal...I start crying just thinking about it...

Larry: (clearly irritated with me) Oh, come on babe, have some better sense than that. You can't vote for a political candidate based on the fact that their wife has cancer and they just renewed their vows or whatever. That's ludicrous! Not to mention, if you ask me, I think he's exploiting this whole thing with his wife's cancer...

Deanna: No, no Larry I don't think so. He wouldn't do that. He seems so sincere. Although I don't agree with much of what he says, I love to just hear him talk. I even think his southern voice is soothing. You know I'm a hopeless romantic and John Edwards fits the bill. I think, if he's taking care of Elizabeth like this while she's going through her cancer treatments...would he not take care of our country in the best way he knew how?

Larry: (laughing now, shaking his head at me...) No Deanna, that's crazy. He would not. He's a whack, I'm telling you. You can't base things on how someone makes you feel . What does he believe? You've got to take all that personal and emotional stuff out and just look at the issues.

Deanna: (sadly looking out window while I say...) Hmmmm...yeah, I know his views are off. But when I saw them on Oprah recently, I just came to really love them as people...you know what I mean?

Back to present reality:

According to some reports, Edwards' mistress, Rielle Hunter, has just been hanging on and waiting for Elizabeth to pass away so she can marry John. Is that not one of the most awful things you have ever heard? She was interviewed by Newsweek and didn't hold back at all in sharing what they called her "scornful view" of Mrs. Edwards. She is on record in a Fox News report saying that Mrs. Edwards gives off "negative energy", and in this Newsweek article she's quoted as saying, "Someday the truth will come out about her [Elizabeth]." Excuse me? Can this woman be any more brazen? Elizabeth is on her sick bed right now but I think some of her girlfriends need to catch Hunter in a parking lot and show her a little "negative energy". They need to put the smack down on that woman. I am dead serious about that.

One time when a woman in the church openly propositioned my husband, I went right over to the fifth pew where she sat and said, "don't go near the pastor again or I'll break both your legs. Enjoy the rest of the service." Larry had an absolute cow about it when he found out and and said, "Honey, we can't keep pastoring if you tell people you're going to break their legs...it's just not appropriate!" I said, "Sorry Larry, but you're just going to have to deal with it. She crossed a line with me that you do not cross, and before you're anyone's pastor you're my husband." Today when he tells that story he says, "you know that was back at the beginning of our ministry and my wife was younger and not as mature..." and to that I say, "Shoot! I'd do the same thing now!" So call me immature. If somebody is going to openly make a pass at my husband, they need to make sure they have a good plastic surgeon who specializes in reconstruction. Okay, back to Elizabeth...

Can you imagine what Elizabeth Edwards is going through right now? While she is dying of cancer she finds out about this torrid affair, during a time when she needs to be reassured of her husband's full devotion and support more than ever. Not only is she terminally sick and feeling poorly, but I'm sure she probably has visions of the other woman marrying her husband, moving into her house, sleeping in her bed, and being an evil stepmom to those precious children. Ughhhh...the whole thing just makes me want to puke. And speaking of kids, Edwards has supposedly fathered a child with the mistress. If you think it can't get any worse...it can. Supposely he had been paying Hunter $15,000 a month in "hush money." Can you imagine? "Oh what a tangled web we weave, when first we practice to deceive..."

This week's PEOPLE Magazine had an article where Elizabeth's best friend, Hargrave McElroy, was interviewed and said Elizabeth is in "excruciating anguish" right now and feels that she has no choice upon the revelation of this news but to stay. McElroy says, "She couldn't say, 'Well, maybe we'll work through this for years, or maybe we should separate for two years.'" The cancer "forced her to choose whether to move forward." I know she's basically a celebrity of sorts and I don't know her personally but I can't help but feel moved with compassion toward Elizabeth Edwards. I'm serious when I say I'm praying for her.

Well that's it my friends. My naivety is OVER. I don't care if a candidate has a story like The Notebook or A Walk to Remember. I could less about their family life, or even if they have a family. We won't know if what is presented about their family is the truth, so why does it matter? All I care about is - where do they stand on the issues, and how have they voted on them? Get these candidates the heck off of Oprah, and just show us on paper what they've done or haven't done.

This isn't about creating a love story. This isn't about a historic moment that will have us all crying. Let's be real, even "Camelot" wasn't real! We now know that JFK was fornicating with Marilyn Monroe and God knows who else! Has any of it ever really been real?

My heartstrings are cut as far as politics are concerned. Just show me their voting record. I want proof of what they've said yes or no to. Show me how long they have been in politics and what they have accomplished. Show me the bills they have sponsored. I don't need to see their wife, their kids, their dogs, their house, or get their cookie recipe. No, no, no. I'm done. I don't care to see the interior decor of their home and hear how many times a week they eat dinner together. It's all a moot point because we can be sure of absolutely none of it. It can all be so easily spin doctored, fabricated, and airbrushed. We really do have to base things on their political voting record alone and their official position papers on the issues at hand, if we are going to make a truly educated, sound decision.

John Edwards has cured me of any interest or fascination I once had with politician's families.

I was wrong about you John.

You are the deadbeat my husband always said you were.

Chalk one up for Teeby. He was right.

Tara Sloan said…
Okay, okay... I am SO laughing at the "don't go near the pastor again or I'll break both your legs. Enjoy the rest of the service." quote! That is your "This is MY house..." moment... Craig still kids me about my rant that day... when will these men get it that we are very passionate women who do not like it when people cross lines that are there on purpose??? I love it D- i absolutely LOVE it!
Although I was mortified by John E. and his mistress as well...
11:02 AM

Anonymous said…
LOL!!! I've had a few of those "this is MY house/I'll break your legs" moments myself...

I pretty much hate politics in general - and yes, John Edwards is extremely sleazy. On par with the science teacher from my high school who was known all over town (I'm from a small town - you can't really be discreet!) for his affairs with students, and then finally made the "noble" decision to be faithful to his wife...after she was diagnosed with Alzheimer's Disease. Smooth move - own up to your sleaziness now that your wife can't remember any of it!!
1:10 PM

Melissa said…
I absolutely love the "I'll break both your legs, Enjoy the rest of the service"! I have been there I can tell you. SPecially when we were Chi Alpha Pastors. Something about college students being attracted the the campus pastor. I too was thinking about voting for him...boy sure glad that didn't happen!
3:01 PM

DaNella Auten said…
Hey did you see you got a shout out? http://aaronsbiz.blogspot.com/
10:45 PM

Thank you for pointing it out, Danella, so I wouldn't miss it. I do read Aaron's blog however with everything that has happened, I am behind in so much blog reading right now. So many I want to catch up with.

This was touching beyond words, really...

Also wanted to tell you I referred someone from church to your blog the other day who is an aspiring photographer. I think she can learn a lot from you.

DaNella Auten said…
Awww I am honored. I am trying, it is picking up. It is really cool, it is what God has anointed me for, and has blessed me to get babes to smile for me, and inspire me and show me angels to make his creations shine. I couldn't do it with out Him. He is my inspiration.
10:40 AM

Anonymous said…
I’ve often heard various folks comment on how wonderfully varied, complex and diverse the English language is, effortlessly welcoming foreign words and phrases ‘into the fold’. The depth of our language is sometimes described as a ‘bottomless reservoir’ of nuance.

I agreed with that sentiment, but no longer, thanks to John Edwards. I’ve been struggling the last two weeks for words to describe exactly how much of a douchebag he really is. And sadly, for the first time I find my native tongue wanting. The adjectives simply aren’t ‘there’ to accurately describe how much of a manipulative, calculating, reprehensible, scumbag, liar, phony, narcissistic, empty-suit, jackass he really is.

See that? My best effort to ‘capture’ the fundamental essence of John Edwards rings completely hollow, like calling the Grand Canyon a ‘really big ravine’. I would otherwise be embarrassed by my linguistic impotence, but I really don’t think it’s my fault. He has simply re-defined the boundaries of douche-baggery, shattering the power of words to define him. It is, in wierd sort of way, a mark of greatness. A legacy, if you will.
11:05 AM

Deanna Doss Shrodes said…
Wow, why don't you tell us how you really feel? lol

I agree with you - he has redefined the boundaries. There truly are no words...

There re only a few times in life I've been at a loss to describe people whether for good or bad. The 9/11 attackers, for instance, and now Edwards and Hunter.
11:33 AM