Praise and worship all the time??? 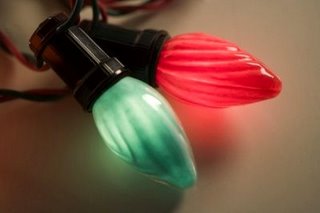 SOMEBODY GET ME A PARIS TEA! Thank you. Okay, I'm sitting here with a cup of Paris tea (my favorite) trying my best to calm myself down.

I have Christmas tree woes. Family dissension woes. Housework woes. What is it about this day? What is it? What is it? I don't want to be a complainer. Truly I don't. There are bigger things going on in the world other than a Christmas tree malfunction. People out there are dealing with big family problems, sickness and disease. There's the war in Iraq. There are starving children in Africa. I know my problems are small potatoes. But honestly, right now I'm irritated and I just need to calm down. So indulge me for a minute and for those that don't want to, just read somebody else's blog.

As usual the guys brought the Christmas tree in the day after Thanksgiving and set it up and just left it there for me to do my thing. Jordan checked five strands of lights to make sure they worked. And so then the work really began.

Nobody wants to do lights, me included but I always end up doing them. Somebody has to. Savanna and Jordan said they'd help this year but the whole time they argued. All the while Amy Grant was singing, "just hear those sleigh bells jingle and ring ting tinglin' too..." and meanwhile the two of them are hurling Christmas stuff across the room at each other.

Well after enduring that fiasco, we plug the tree in and a third of it is not working. I was frustrated, but a second later, Jordan just touched the tree, and "boom!" they came on. Halleluiah! I said, "kids leave it on, do not touch it again. Just leave it here until Christmas day, and things will be fine, thank you very much."

I proceeded to put all the beads and ornaments on. I thought, "it's a wonderful life." I went around the next few hours working on the rest of the decor, listening to XM Holiday music going la la la la la and thinking to myself, "it's the most wonderful time of the year especially because both Jordan and Savanna busied themselves in separate areas of the house and are no longer having their little spat!"

But then today I have noticed on and off as I am doing my mountain of church work and house work that the trees are periodically off. So I yell, "WHO TURNED OFF THE TREES?" To which one of the kids say, "I did..." To which I say, "And WHY pray tell, have you done that?" No real solid answer back, just an "I dunno" type thing. There is SOMETHING about a button that makes people feel they just HAVE to touch it.

All day long I've gone back and forth between my briefcase to my phone to my house, getting a myriad of things done all the while with a dull headache. Maybe it's PMS. Maybe it's the devil. Maybe it's just normal life and I have too high of expectations. But at one point both the boys (and some of their friends who were here spending the night) and Savanna were having another one of their brou-ha-ha's. This was all surrounding Playstation, which is often an issue of spiritual warfare in our house. In the midst of this Savanna says, "Mom, can I go to Savannah Dempsey's? Her Mom says it's alright."

Mrs. Dempsey was kind enough to even come over and pick her up and she stayed there for 3 hours. I was able to finish the housework, ironing all the family's clothes for tommorrow, making a few more "care calls", returning messages, working on a message for Wednesday, washing and folding two loads of laundry, and more without hearing, "Mom...get her out of here! She's touching the Playstation again! She's bugging us!" ...

There was no more la la la la la most wonderful time of the year stuff for me. I began singing "through many dangers, toils and snares I have already come, tis grace that brought me safe thus far and grace will lead me home..." Okey dokey...

So about 30 minutes ago I'm doing the third load of dishes for the day and getting the briefcase packed for tomorrow and I look over and see, only 1/2 the family tree is lit. WHY, WHY, WHY? So I ask this question and I find out, somebody just felt they had to go over and press the button to turn it off. So I yell, "WHATEVER! I'm not fixing it! We will just have an unlit tree for Christmas since no one in this house can keep their hands to themselves! Enjoy your UNLIT tree, everybody!"

To which Larry says, "Honey, why are you so upset? Calm down." He proceeds to go over and take a look at the tree. And after several moments of looking at it he says, "Deanna, how in the world did you do these lights in the first place anyway?" He proceeds to tell me all the reasons they were put on the tree wrong. (I put them on from the top down...I plugged them all into one switch, etc.) Pardon me, it's been a while since I graduated from Christmas tree lighting school.

Like I said, it's time to sit here and have a Paris tea. AND take a long hot bath before bed. Misty told me yesterday that a lady she works with asked her, "So, when you are married to a pastor, what's it like? Do you just sit around at home and praise and worship all the time?"

I don't know how Misty kept a straight face on that one. Some of the time might be praise and worship, but for sure some of the time we're just praying and interceding that we won't lose our minds.