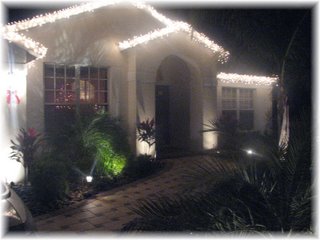 Finally our house is completely decorated for Christmas! And I love it!

Maybe we will even win Northampton Yard of the Month again, who knows!!! Well, I say "finally" decorated~ and actually we are early - before December 1. But...it feels like "finally" because I was racing against time to get it done in time for Larry's birthday.


Actually he ended up helping! I didn't want it to be that way - that he was helping me around the house on his birthday however the fact that the Mustang has been out of commission has really set me back big time on getting anything done. Larry needs to fix it however he simply hasn't had the time. He thinks it's just the battery or something simple, it's just finding the time. I forgot what it was like to not have my own car. I was not able to fix the huge dinner I wanted to for his b'day because we were shuffling the van back and forth to all our work/appointments. So we had pizza. But he was happy.

We had most of the inside done except a very few things, but today we got the lights done on the outside and the rest of the finishing touches put on things.


I was recalling tonight that it was Thanksgiving time last year that we had the front yard re-done with the new paving and landscaping, and also our sound system put in. Yes, we have a sound system in the front yard...I know that sounds crazy to some of you reading this who have never been to my house, but it's really cool. We put a CD on inside the house and there are speakers that are in the shape of rocks that are hidden throughout the flower beds outside. Sort of like going to Disney. (ha ha!) So we play music in the evenings usually...Sinatra, Chris Botti, Kenny G., etc. Right now it's Christmas so you might hear anything from Bing Crosby to The Nutcracker. Everyone comments about how they get a different attitude just walking down the sidewalk into our house. And those in our neighborhood who walk outside really like it. Well, I'm the musical half of our marriage, however...it was Larry's idea to do this to the front yard and I'm so glad he suggested it!

One of my goals in moving into this neighborhood was to win "yard of the month." My kids said with all the old people who live here who have nothing to do but garden all day, we'd never win. They told me to just give up. That's all I need to hear to make sure I get something done - just challenge me. Well, I told the kids, if I can't do it, I'll find someone who CAN. When Sierra Landscaping was done with our front yard, just a WEEK later, we won "yard of the month." I jumped up and down on the lawn screaming and promptly had Larry take my picture next to the "yard of the month" sign. These retired people have NOTHING on us, lemme tell you. :-)


Anyway, last year the new front yard went in, and on the first night it was completed we couldn't stop sneaking out to take a peek. We were in our jammies at about midnight and snuck out there again and went across the street to our neighbors driveway just to stare at it. Our landscaper lives in the same development we do. While we were out there at midnight his wife sent him out for a gallon of milk or something and he rode by and saw us staring at it at midnight and stopped and said, "I can tell you guys really like this new yard..." He thought we were so funny.


So there Larry and I were in our jammies, standing over at the neighbors, with Sinatra playing on the CD (quietly, so as not to wake any neighbors up...we keep it low enough that it sets an ambiance outside but can't be heard by anyone inside.) And we came out to the street and stood there in our jammies and slow danced to Sinatra underneath the street light. What a memory... Last night I tried to re-create it when we were standing out there but it just wasn't the same. Some things are once in a lifetime. Although we often play Chris Botti in our jacuzzi or listen to Delilah and Larry will stand up in the middle of the jaccuzi and ask me to dance. :-)


Well, the lights are all done in the front. Larry wants to put some more in the back this year since we have the patio completely done. Good idea! However I think the priority should be to fix the Mustang first so I can actually FUNCTION normally. :-)