Bobcats, hoods, and other crazy stuff 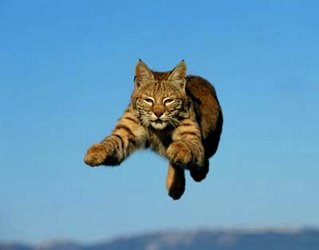 So this is one of the craziest days of my life.

This morning it's 7:30 am and I'm driving to the church for morning worship. I'm headed there in my car (pictured above) and as I'm going 70 miles an hour down 75, a bobcat darts in front of my car. Yep, it looked just like the picture above. Pretty crazy, huh? I missed hitting him by just inches, maybe less. How crazy. He just darts across the road like he has nothing better to do at 7:30 on a Sunday morning.


So then I'm staring at the hood periodically on the rest of the drive (which I normally don't do...I usually look down the road quite a ways but due to the bobcat incident, I'm a little distracted) and I notice my hood is popped up on the car. Never would have noticed this had the cat not crossed my path. It was rattling but then again I always have the radio up, this morning being no exception. Thankfully at 7:30 there aren't a lot of cars on 75 on a Sunday. So I pull over the try to shut the hood. It won't shut. I'm pushing down, sitting on it, all kinds of crazy stuff out there in my dress suit and heels feeling like an idiot, and the blasted thing won't shut. I tried to open it all the way, which it won't do either. How crazy. 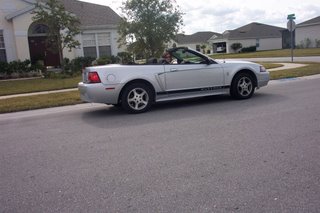 So I figure, well at least it's hanging on there by something, so I get back in and start driving, but it's open even more and rattling worse which scared the heck out of me. I get out again, try to pull the latch open inside the car to open the hood, pull on it some more...no dice. I push and push. Still won't go down. I was so frustrated. So I get back in and drive about 10 miles an hour all the way to the church. A ways down the road, a young man from church was behind me also headed to worship rehearsal. He stays behind me on the trip there and when we get to the church says, "what's wrong?" and gets out and tries to help me. He pushed down on the hood...nothing. Still won't close. He pulls. Nothing. Finally he sticks his hand under the hood and squeezes some metal things together and pop goes the hood, and comes up. Evidently there's a safety latch I didn't know about! Duh, duh, duh! Well, now I know.


Then we get to church and it still gets crazy. Nothing went right with worship. Everything was in it's own direction so much so that it even got comical. I just stopped the service at one point and said, "nothing's going right today, let's pray." How crazy is that. I haven't done that in 20 years of ministry but I did today! (Stop the service I mean. Obviously I have prayed. I'm one of those pastors that still believes in prayer.)

So I stop the service cold and say, "everything's going crazy. Let's just stop and pray." So we did. Someone told me later they were so grateful I did that. They said, "PD, everybody could see the thing was going like a train wreck and we're just so glad you acknowledged it and didn't try to just go on and ignore it because visitors might have thought, 'oh it's like this every week.' No, it's not, obviously. This was just a crazy "off week." At the outset of service I came up and enthusiastically proclaimed, "Pastor is preaching on the power of coming to the Lord's table today!" As I made this declaration, I pointed to the communion table. (Communion was coming a little later in the service.) But I notice, the table is bare. Nothing there but a flower arrangement. As soon as I make my declaration I look back at our head usher. The color drains out his face and he looks completely freaked out to realize that for the first time EVER the ushers forgot communion. He races out of the sanctuary and mobilizes people to get it ready and get it back in there. In between that time, it seemed so many things were haywire, like I said it even got comical.

Finally after my prayer, Larry called everybody to the altar who wanted a touch from God. Note to self: it's always a great idea and in order to call people to the altar for a touch from God. Plenty of people came and we just prayed for people and it was a good time. When he went back to his seat on the platform, our youth pastor said to Larry, "Whew, that saved the day!" From my bobcat incident up til' now things have been pretty nutty, but I have kept a good attitude and just laughed about it all. I realize how much the devil hates us. He tries anything to distract the people of God. He'll pull out a bobcat if necessary. What a double loser he is. Oh well, he had no idea who he was messing with because at churchwe don't have to be perfect, we just state it like it is, "things are crazy today folks, let's just get on our faces and pray." Works every time. I was worried, "what are these visitors today going to think?" Pastor T said he wouldn't be surprised if they said, "you know that church was a little crazy today, but I still loved it!" If they stayed through today, they'll stay through anything. It's all about God and not about us anyway.