Finally ready to take off 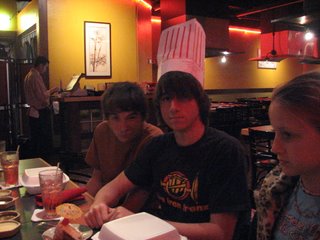 Well, my wonderful first born is growing up...he's now officially 17. I can't believe it...I have a 17 year old. 17 years ago now I had just been out of recovery for about an hour and a half, and was being taken to my hospital room. Dustin was sleeping. Not much has changed. I'm still recovering from everything on a regular basis, and he's still sleeping. :-)

After doing my plethora of initiatives, evening came and we went out for Dustin's family birthday dinner, to Kobe...one of our family favorites. We started it when the kids were little because it was one of the places the always behaved because they would be so intrigued by the chef. It made for a very peaceful dinner. And it's still a great night out now, and one that always promises to entertain them. We took Steven with us. He hadn't been to Japanese since he was a little kid. He loved it. We had them come out and sing and bring a cake. Dustin was a little sheepish when they came out but I could tell he was enjoying himself. Here he is with the chef hat they gave him. Jordan still has his from last year's birthday.

After shopping for his jacket (he hasn't had one since we left Maryland) we dropped Savanna off at the Harts (she's going to Georgia, which she's very excited about) and then came home to pack our bags. In between packing our bags, Dustin and I worked on doing  "Bless the Broken Road" together. He's playing it and we are both singing it for the wedding. I still have not been able to practice "From this Moment On" aside from listening to it because my voice has been too raspy. Broken Road is lower, so it was workable. We'll rehearse more when we get there. It's now 1:30 am, our bags are packed, My Mp3 freshly loaded with the sound track to listen to again and again on the plane, and the house is a mess but I'll tackle it when I get back. That is the least of my worries right now. Let's just have a wonderful wedding and we'll worry about dusting and vacuuming next week. :-)